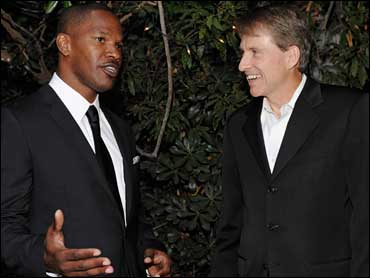 Jamie Foxx, Fran Drescher, Lucy Liu and Isaiah Washington were among the stars who proclaimed their love for Barack Obama Thursday night at a swanky soiree.

VIP donors paid $2,300 each to attend the Black and White Gala for Barack Obama at a private home in Beverly Hills.

Mario Van Peebles and other guests munched on croissants, cruditDes, olives and eggplant while a seven-member gospel choir performed.

They set the evening's tone with a rousing song: "Time for a change. We are the people, we can do it."

The party raised more than $200,000 for the Obama campaign, said Theresa DeBell, who hosted the event with her husband, Robert Siegel.

Foxx, who is set to appear at the Democratic National Convention in Denver, greeted congressmen and other guests at a table in the corner, his teenage daughter by his side. "Dancing With the Stars" runner-up Melanie Brown, in a bejeweled black gown, chatted with actress Nia Long, who has been following Obama's campaign for the past year.

"This is the first election where I've actually paid attention to every single thing, and I think it's because I'm a mom now," Long said. "I just think Barack is amazing... I admire him. I admire Michelle."

Drescher, a women's-health advocate who worked with Obama on the Gynecologic Cancer Education and Awareness Act, was mistress of ceremonies. Drescher said she originally supported Hillary Clinton but now is fully behind Obama.

"He stands for everything that I believe in," she said. "I think he's inspirational, and that's what this country needs right now."

Drescher, who is set to speak at the women's caucus at the DNC, said she still hopes Obama might pick Clinton as his running mate.

"If not, I'm going to go with one of the Lohans," she said. "I think Ali has a bright, new future. But maybe Cody could really get the job done."