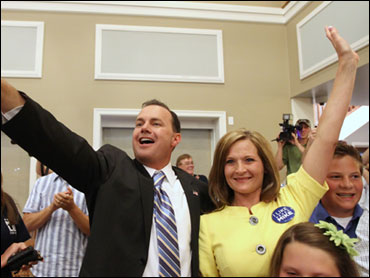 About 1,000 soldiers at this sprawling western Baghdad base took a break Tuesday from the war's day-to-day grind to be entertained by comedian Robin Williams, former NFL quarterback John Elway, and sportscaster and model Leeann Tweeden.

Troops were so excited they gang-tackled Williams into autographing dozens of photos of himself, posing for pictures and displaying his rapid-fire humor.

The three stars landed in Baghdad along with Gen. Richard Myers, chairman of the U.S. Joint Chiefs of Staff, in military helicopters for a visit to boost troop morale during the holiday season.

The VIPs were greeted with deafening cheers from soldiers representing units including the 1st Cavalry Division based in Fort Hood, Texas; the 256th Brigade of the Louisiana National Guard, and the 2nd Bridged of the 10th Mountain Division out of Fort Drum, New York.

"I know we in America wouldn't have the life we have if it wasn't for people like you," said Tweeden, who visited Baghdad last year with Williams for a pre-Christmas event organized by the United Service Organizations.

"But once my kids told me that it'd be a great idea, I knew it was the right thing," he said before showing off his trademark quarterback skills by tossing several balls into a crowd of clambering soldiers.