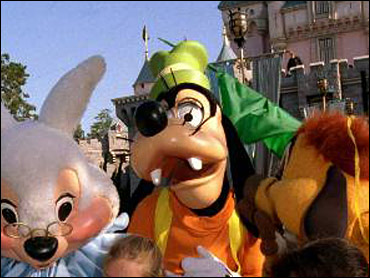 According to a Disney survey, celebrities are a little bit goofy.

In a poll of 45 actors, musicians and athletes, 20 percent most identified with the Disney animated character Goofy. Non-celebrities agreed, with 15 percent of 8,000 consumer respondents also selecting Mickey Mouse's best friend as the character they relate to the most.

Among the celebrities asked, John Stamos, Kelsey Grammer and Jim Belushi are goofy for Goofy, while David Arquette, Peyton Manning and Terry Bradshaw are daffy about Donald Duck.

Oprah Winfrey topped the list of the most desired Disney celebrity travel companion, at 16 percent. Clint Eastwood placed second with 11 percent and Julie Andrews was third, with 8 percent.

Other survey results revealed singers Avril Lavigne and Ashanti know the words to "It's a Small World." Arquette and his wife, Courteney Cox, both picked The Haunted Mansion as their favorite attraction.