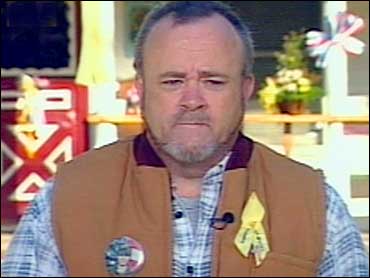 More than a week of worry over U.S. Army Pfc. Jessica Lynch quickly turned into a gleeful celebration with blaring sirens and fireworks as her family and friends rejoiced over her rescue in Iraq.

Lynch's family was told at about 6 p.m. Tuesday that the missing 19-year-old supply clerk with the 507th Maintenance Company had been rescued from an Iraqi hospital by American troops.

Her father, Greg Lynch, can't wait to give her a hug.

"That's the first thing," he said. "And I hope there's no reporters in the way of us."

So far though, Lynch said he still had not heard about his daughter's condition but was awaiting a call.

"It was just terrific, you know, that someone would go in and risk their own lives to save one person," he told CBS News Early Show co-anchor Hannah Storm Wednesday morning. "And we do feel sad about her troop members, and we wish they could get the good news, too, for their families."

As the news spread, more than 70 friends and relatives gathered at Greg and Deadra Lynch's two-story, wood-frame house in the farming community of Palestine to show their support and share in the celebration.

"Everyone was excited and happy to hear the good news," said Lynch's friend Jenny Baileys on the Early Show. "We were all jumping around partying."

The soldier's older brother, Gregory, is a member of the National Guard based in Fort Bragg, North Carolina "They did a wonderful job up there. I knew they were going to bring her home safe. I didn't realize that it was going to be this soon," he said.

"She was so sweet. And she was just really funny. And kind to everybody. Always put herself last. She always put everybody else first," her friend Nicki White told CBS News." She's a great person."

It's her personality that will help her pull through the ordeal, Lynch's father said.

"I'm sure [she's been] joking and kidding around, and just knowing Jessie, her spirits are still soaring high, even though what she's went through," he said. "She is a wonderful girl. And we know she can do this."

Several miles away from Palestine, in the county seat of Elizabeth, residents threw their own celebration. An impromptu parade of cars and fire trucks wound through the town as people milled along the sidewalks and set off firecrackers.

Lynch was among the soldiers of the 507th Maintenance who were ambushed March 23 near Nasiriyah, a major crossing point over the Euphrates River northwest of Basra.

She was rescued Tuesday from an Iraqi hospital in Nasariyah, and has several broken bones and possibly gunshot wounds. She had not been shown on the television tape, and had been listed as missing in action

A helicopter-borne team of Navy SEALs and Army Rangers rescued her about midnight local time, the Washington Post reported, after CIA operatives in Iraq located her in a hospital near Nasariyah.

Last week, Greg Lynch said he expected his daughter would be found and would return home to pursue her dream of becoming a kindergarten teacher. Lynch joined the Army out of high school to earn enough money to attend college.

Relatives of several other missing and captured members of the 507th said Tuesday night they had received no news, but some said Lynch's rescue renewed their optimism.

"It gives me hope," said Jack Dowdy, father of missing Master Sgt. Robert J. Dowdy, 38. "I'm just sitting here hoping if they find one maybe they will find some more."

"I'm hoping they found some other news too, and that maybe she knows something," said Janie Kiehl, mother of missing Spc. James Kiehl, 22.

Lynch enlisted through the Army's delayed-entry program before graduating from Wirt County High School in Elizabeth.

Before the war started, Lynch wrote a letter to family friends Glenda and Don Nelson. The letter, dated March 18, arrived on Monday.

"She said she was ready to go to war and was just waiting on President Bush's word, but I could tell she was scared," said Don Nelson. "We bawled like babies when we read it. It tore us up."

Dallas police say Arianna and Aaliyah Gutierrez were last seen in the back seat of a 2008 gold Hyundai Sonata.