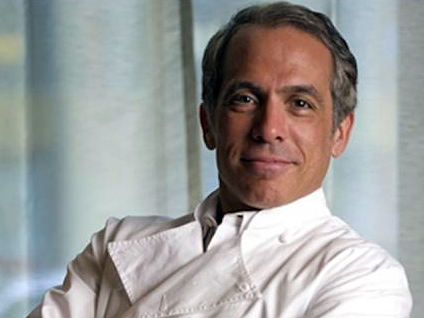 Geoffrey Zakarian's culinary career has spanned more than 20 years and, as winner of The Food Network's "Next Iron Chef: Super Chefs" competition, things only seem to be heating up for this celebrity chef.

He has two hotspots in Manhattan - The Lambs Club and The National.

Geoffrey landed his first kitchen job at the famed Le Cirque and, in five years, worked his way up from Pastry Sous Chef to Chef de Cuisine under Chef Alain Sailhac. During those five prosperous years, Geoffrey traveled and staged at prestige places around Europe: Arpege and Au Quai des Ormes in Paris; Auberge de l'Ill in Alsace; The Dorchester in London; Le Chantecler with Jacques Maximin in Nice; and Pierre Orsay in Lyon.

In 1987, he became executive chef of the legendary 21 Club. In 1988, restaurateur Jeffrey Chodorow hired him to as executive chef of 44 at the Royalton Hotel. In 1995, he opened the Blue Door at the Delano Hotel in Miami.

This past fall, Geoffrey took a bite out of the Big Apple and opened both The Lambs Club at The Chatwal Hotel, featuring "his signature modern American cuisine in a luxury bar and grill setting," and The National at The Benjamin Hotel, his spin on the grand cafes that help define the rich character and culture of Europe.

Recently, Zakarian emerged victorious in the fourth season of "The Next Iron Chef: Super Chefs" on the Food Network. He now appears regularly on "Iron Chef America," as well as Food Network's "Chopped," where he's a recurring judge. Geoffrey also appears on Food Network's "The Best Thing I Ever Ate," and is a recurring featured judge on "24 Hour Restaurant Battle."

On "The DISH," on "The Early Show on Saturday Morning," Geoffrey showcased his ultimate dish: Cod Wrapped in Cabbage with Smoked Tuna.

Blanch the cabbage in a large pot of boiling salted water. Shock it in ice water to stop the cooking. Dry the cabbage and remove any thick, tough stems with a sharp paring knife.

Portion the cod into four square pieces. Season them with kosher salt. Moisten a clean work surface and lay out a sheet of plastic. Pour two tablespoons of olive oil in the center of the plastic. Place one of the cabbage leaves on top of the olive oil. Place one slice of the smoked tuna in the center of the cabbage. Place one portion of the cod on the tuna. Place another slice of the tuna on top of the cod. Draw up the edges of the cabbage around the cod and then roll the plastic over it, towards your body, sealing the cabbage packet. Tuck the edges of the plastic under the packet and set it aside. Repeat with the other portions of cod.

To finish, cook the cod portions in a steamer. Load the hot potato spuma in an ISI siphon and pressurize it with a cream charge. Unwrap the steamed cod and dry it on a paper towel. Place the cod in the center of a place and pipe the potato spuma around it. Shave bottarga liberally on top of the potato spuma with a microplane. Serve.

Combine the salt, brown sugar, chili powder. Lay down a bed of this rub in a hotel pan. Lay the tuna on top. Cover the tuna with more of the rub. Let it marinate for 24 hours.

The next day, gently rinse the rub from the tuna and pat it dry with paper towels. Lay the tuna on a cooling rack and let it dry in a walk-in, under the fans, for a few hours or until the surface is slightly tacky.

Soak the wood chips in water for a minimum 30 minutes.

Prepare a 6-inch hotel pan by lining it with aluminum foil. Drain the wood chips and put them on top of the foil. Put the hotel pan over a burner and light a burner on high.

Put the fish in a perforated 2-in hotel pan and cover that tightly with aluminum foil. Poke a few small holes in the foil to encourage circulation.

When the wood chips are smoking vigorously, drop the perforated pan into the 6-inch pan and let the fish smoke for 4 minutes. Then turn off the flame and let the fish sit over the chips for 10 minutes more before chilling.

Sweat the onion and garlic confit in the olive oil over medium heat until translucent. Add the potato, chicken stock, heavy cream, and butter. Bring it to a low simmer and cook until the potato is very tender. Add the agar agar. Put everything in the blender and puree it on high until it is very smooth. Pass the spuma through a chinois and season with salt. Load it into an ISI canister and pressurize it with one cream charge.

Trim the oxidized ends of the Brussels sprouts and remove any ugly outer leaves. Shave the cleaned Brussels sprouts cross-wise as thinly as possible on a mandolin. Transfer them into a stainless steel mixing bowl.

The next day, heat the oil in a heavy-bottom pot to 350 degrees. Make sure the oil does not fill the pot by more than a third so it doesn't bubble over when you add the potatoes. Prepare a sheet pan with absorbent towels. Drain the potatoes and fry them for three minutes. Remove the blanched fries from the oil with a mesh skimmer. Rest the fries on the prepared sheet pan. Rest the fries for a minimum of 15 minutes.

To finish, return the fries to the hot oil for 3-5 minutes or until they are crispy. Change the absorbent towels on the sheet pan. Remove the crispy fries from the oil with a mesh skimmer. Place them on the prepared sheet pan and season liberally with sea salt. Serve.

Shake hard and strain into chilled double rocks with big rock. No garnish.