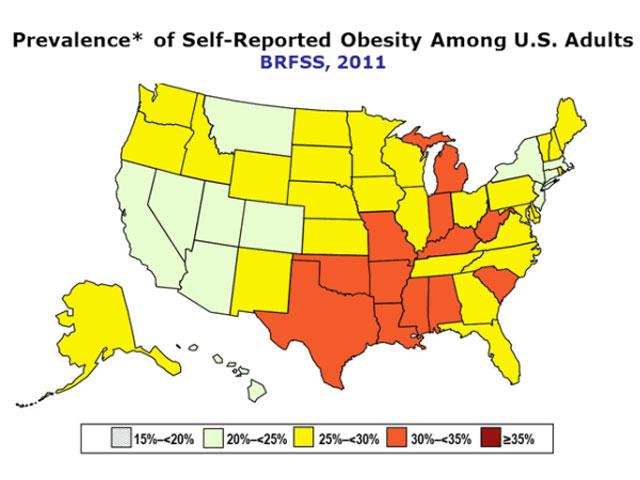 The Behavioral Risk Factor Surveillance System telephone survey from the Centers for Disease Control and Prevention gathered a nationally representative rate of Americans across the U.S. by calling 400,000 Americans in 2011, asking them about their height and weight.

What did the survey show? Overall, more than a third of adults are obese, similar to earlier reports, but rates differ by state.

Colorado was lowest, at just under 21 percent obesity, and Mississippi was highest at nearly 36 percent. No state had obesity prevalence under 20 percent and 39 states had a prevalence of 25 percent or more.

The CDC released the figures Monday. The new obesity map of 2011 rates was created using a different set of methodology from earlier maps, namely the inclusion of cell-phone only households into the data. That means the data can't be scientifically compared to earlier obesity rates, and this new map will serve as a baseline reading of national obesity rates for years to come

A time-lapse map on the CDC's website shows obesity in America dating back to 1985 through 2010 - the map over time becomes more colorful as it approaches current rates of the obesity epidemic.

To see where your state stacks up, visit the Centers for Disease Control and Prevention.