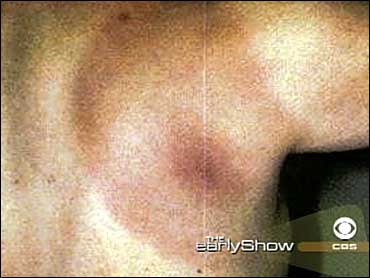 Lyme disease has climbed to its highest level on record in the United States, in part because more and more homes are being built in the woods, the government reported Thursday.

During 2002, a total of 23,763 cases were reported to the Centers for Disease Control and Prevention — up 40 percent from the previous year.

"It is the highest number that we've had so far," Dr. Erin Staples, a CDC researcher, told CBS Radio News, calling the rise alarming.

Lyme disease bacteria are transmitted to humans by ticks that are carried by deer. The CDC attributed the rise to "better reporting, better recognition by physicians, people are spreading into tick habitats ... some increase in the deer population that carries the tick, as well as you're getting some spread of the ticks themselves," Staples said.

Lyme disease was named in 1977 when a cluster was identified in Lyme, Conn. The 2002 cases were mainly in the Northeast, mid-Atlantic and north-central states. Only Hawaii, Montana and Oklahoma reported no cases in 2002.

There are simple things that you can do" to lower your risk, "like using insect repellent containing Deet," said Staples. "We recommend daily tick checks. If you're able to get it off within 24 hours of it first biting you, you seriously decrease your risk of getting Lyme disease."

The disease is often identified by an expanding "bulls-eye" rash that develops days to weeks after a tick bite. "Often when you have this rash, there are symptoms that accompany it," reports The Early Show medical correspondent Dr. Emily Senay. "They can be fatigue, muscle ache joint pain, and fever. Now, if it goes untreated, this can become a much more serious disease with neurological symptoms that can be severe. Treating it early on is key."

If untreated, the disease can cause joint swelling and brain inflammation.

If you have the rash, it is possible that the tick is still present, but Senay notes, "very often people don't even realize that they've been bit by the tick. And just because you've been bit by a tick does not mean you will get Lyme disease. The actual transmission rate is probably a lot lower than many people think."