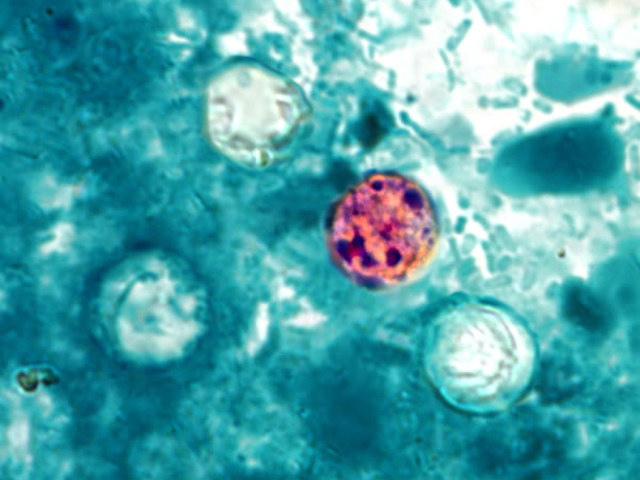 Health officials are investigating a sharp increase in reported cases of cyclospora, an intestinal infection caused by the parasite Cyclospora cayetanensis.

Since May 1, there have been 206 cases of cyclospora infections reported to the U.S. Centers for Disease Control and Prevention. That's up from 88 cases during the same time period last year.

The most common symptom of the infection is watery diarrhea, which can be profuse. Other symptoms include loss of appetite, fatigue, weight loss, nausea, flatulence, abdominal cramping, and muscle pain. People may also experience fever and vomiting.

Cyclospora infections typically occur when someone consumes food or water contaminated with the parasite. It is not spread from person to person.

Symptoms typically begin about a week after ingestion of the parasite. If left untreated, the illness may last anywhere from few days to a month or longer, and may have a remitting-relapsing course. The illness, known as cyclosporiasis, can be treated with antibiotics.

Cyclosporiasis occurs in many countries but is more common in tropical and sub-tropical areas. Past outbreaks in the United States have been linked to various types of imported fresh produce, including basil, cilantro, mesclun lettuce, raspberries, and snow peas.

The CDC recommends health care providers consider the possibility of cyclosporiasis and test for the infection in patients who have prolonged symptoms.