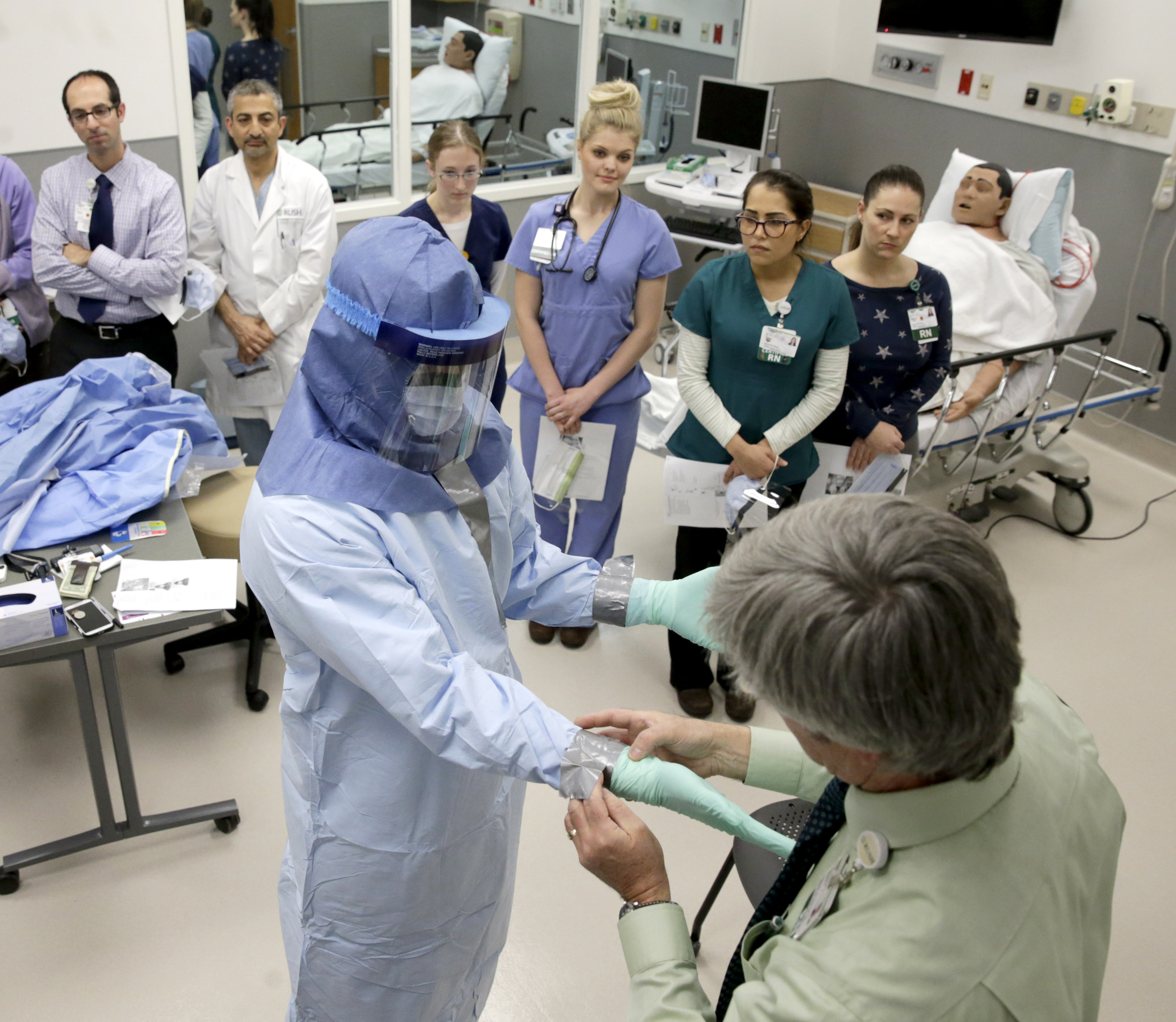 The Centers for Disease Control and Prevention released the long-anticipated updates Monday evening. Health workers have been pushing for new standards since two Dallas hospital nurses were diagnosed with the disease this month after treating an Ebola patient.

The guidelines call for face shields, hoods, boot covers and other garb that leave no part of the body exposed. They also call for a trained monitor to supervise the donning and doffing of protective wear. And they call for repeated training and practice.

The CDC guidance was expected as early as Saturday, but its release has been pushed back while it continues to go through review by experts and government officials.

Experiences by medical staffers caring for Ebola patients at Emory University Hospital in Atlanta and the National Institutes of Health Clinical Center are reflected in the guidelines, the CDC said.

"The CDC said, you know something, they didn't seem to work, we're going to make them more strict," said LaPook on CBS This Morning.

Health workers had been pushing for the guidance since the nurses at Texas Health Presbyterian Hospital in Dallas were infected. They had treated an Ebola-infected patient named Thomas Eric Duncan - the first person diagnosed with the virus in the U.S.

Exactly how the two nurses were infected is not clear, said CDC Director Dr. Tom Frieden during a Monday night teleconference with reporters.

"We may never know exactly how that happened, but the bottom line is, the guidelines didn't work for that hospital," Frieden said.

The new guidelines include:

-Use of protective garments, hoods, face shields, double gloves, face masks or respirators and other protective equipment to cover every square inch of a health worker's body.

-A call for health workers who may be involved in an Ebola patient's care to practice repeatedly and demonstrate proficiency in donning and doffing gear before ever being allowed near a patient.

-Placement of a trained hospital employee to supervise all aspects of care in an Ebola patient's room and watch that all health workers put on and take off gear correctly.

Duncan's infection and subsequent death led to the monitoring of about 50 people who came in contact with him before he entered the hospital and dozens of health care workers who cared for him after his admission.

Some good news this week: The 50 in the initial contact group have passed a 21-day observation period and no longer are deemed at risk for coming down with the dreaded disease.

Youngor Jallah spent the past three weeks confined to her small apartment with her children and boyfriend, fearing they had contracted the deadly Ebola virus from her mother's fiance.

But with the household emerging symptom-free from the incubation period, Jallah's family members are now trying to resume their lives - replacing the personal belongings incinerated in a cleanup at her mother's home, and overcoming the stigma of the Ebola scare that has gripped Dallas.

On Monday, Jallah beamed as she sent her children back to school with clearance from the Dallas County health department tucked into their backpacks. Her mother emerged from her own confinement and started looking for a new place to live.

"We were sitting here traumatized," Jallah told The Associated Press on Monday. "We just thank God we never came down with the virus."

Jallah's fiance, Thomas Eric Duncan, was the first person diagnosed with Ebola in the U.S. He died Oct. 8.

Health officials said Monday about 50 people have passed the incubation period safely. Others who are still being monitored include health care workers who treated Duncan as well as those who cared for two nurses who had treated Duncan and also became infected.

There are now about 120 people in Texas being monitored for symptoms, with their wait period ending Nov. 7, said Dallas Mayor Mike Rawlings. He said the number may fluctuate.

There are also about 140 people being monitored in Ohio because of contact or potential contact with nurse Amber Vinson, Ohio officials said. Vinson, who cared for Duncan in Texas, flew from Dallas to Cleveland on Oct. 10 and flew back Oct. 13.

An Ebola patient who was being treated in Atlanta since early September was released from Emory University Hospital on Sunday after he was determined to be free of the virus and no threat to the public. Hospital and health officials never released his name, in keeping with his family's wish for privacy.

Health officials said they were relieved as the monitoring period ended for many, and after a cruise ship scare ended with the boat returning to port in Texas and a lab worker on board testing negative for the virus.

After Duncan was diagnosed with Ebola, Troh, her 13-year-old son, Duncan's nephew and a family friend were ordered by a Dallas court to stay inside the apartment among Duncan's used linens. Five days later they were evacuated to a four-bedroom home in an isolated corner of a 13-acre gated property owned by the Roman Catholic Diocese of Dallas, southwest of downtown.

Except for a few plastic bins filled with personal documents, photographs, trophies and a Bible, the apartment was stripped down to the carpeting and the contents were incinerated.

The city of Dallas announced Monday it is coordinating with a local church and donors to provide Jallah's mother, Louise Troh, with funds to pay for six months of housing. Once she chooses a location, nonprofits will assist the family with furniture, linens and other household items, the city said.

"We want to restore what's lost but more than that, we want to give her a running start on her new life," said Troh's pastor, George Mason of Wilshire Baptist Church in Dallas.

While health workers cleared Jallah of having Ebola, the disease's stigma lingers - including among fellow Liberians, she said.

"If they see me at the store, they run away," she said.

Food choices that can help you live longer
Thanks for reading CBS NEWS.
Create your free account or log in
for more features.
View CBS News In
CBS News App Open
Chrome Safari Continue
Be the first to know
Get browser notifications for breaking news, live events, and exclusive reporting.