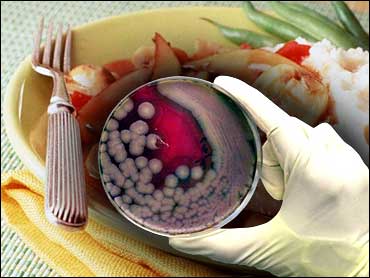 Next time you have a case of diarrhea that lasts a day or more, chances are better than 1 in 3 that it was food poisoning.

As many as a quarter of Americans suffer a food-borne illness each year - though only a fraction of those cases get linked to high-profile outbreaks like the recent salmonella-peanut scare, according to the U.S. Centers for Disease Control and Prevention.

"Outbreaks are dramatic instances," says Dr. Robert Tauxe, a CDC expert on the subject. But they highlight a health threat that many people exaggerate and misunderstand, according to some experts.

Scientists have counted more than 250 food-related types of illness - from viruses to bacteria to parasites. Most common are Norwalk-like viruses - famous for sickening cruise-ship passengers. They account for about two-thirds of known food-poisoning cases, according to the CDC.

Two types of bacteria, campylobacter and salmonella, are the next most common. Campylobacter is blamed for about 14 percent of food poisonings, salmonella for roughly 10 percent.

The exact toll of these and other bugs is not really known.

Ten years ago, a team of CDC scientists put together the best enduring estimate of how many Americans get food poisoning each year: 76 million illnesses, which resulted in 325,000 hospitalizations and 5,000 deaths.

No more recent figures are available. But the current numbers must be close to 87 million cases, 371,000 hospitalizations and 5,700 deaths, according to an Associated Press calculation that used the CDC formula and current population estimates.

The statistics seem even more alarming in the context of a parade of high-profile food-poisoning outbreaks in recent years: salmonella poisoning linked to hot peppers and tomatoes from Mexico that sickened more 1,400 last year; an E. coli outbreak from bagged spinach in 2006; and even deadly cases of hepatitis A from green onions in 2003.

The recent peanut-related salmonella outbreak has caused more than 640 confirmed illnesses in 44 states and been linked to nine deaths. It was traced to a Virginia-based company, Peanut Corp. of America, which makes minor-label peanut butter, peanut paste and other products.

Those numbers just scratch the surface: A case is confirmed only after a lab test is sent to the CDC. Many sick people just soldier on without even seeing a doctor.

Health officials assume that for every salmonella case, there are three dozen unreported cases. By that calculation, the latest peanut-related outbreak actually has sickened closer to 20,000 people.

But the problem could be a lot worse.

Also, despite sometimes dramatic problems in food production and inspections, the U.S. food supply is still considered one of the safest in the world, several experts said.

Food poisoning affects an estimated 25 percent of Americans every year. That compares with roughly 30 percent of people in industrialized countries, according to the World Health Organization. The toll, of course, is much higher in developing countries, where diarrheal diseases are a major cause of death for children.

But not all of our food comes from within our borders, as demonstrated by last summer's vegetable-caused outbreak.

"I usually say it is one of the safest in the world," said Tauxe, when asked about the U.S. food supply. "But increasingly, our food supply is the world."

Patients suffering gastric distress sometimes assume food poisoning, partly because of all the outbreak news and partly because it's human nature, some doctors said.

"I think a lot of people in general say, 'I have symptoms. I must have eaten something that's caused this,'" said Dr. Andi Shane, a pediatric infectious disease specialist at Atlanta's Emory University.

Patients may not consider an infection came from some other means, like handling a contaminated tissue, she said.

Some may also find the latest outbreak unsettling because it involved a prepackaged food like peanut butter, said Dr. Akiko Kimura, an epidemiologist with the California Department of Public Health.

"It's ready-to-eat, and so there wasn't anything the consumer could do," she said.

Food disease investigators say their experience has made them careful to wash their hands, review restaurant inspection reports and think carefully about the foods they eat.

"I am fond of many foods, but I draw the line at eating raw meat and raw poultry, raw oysters and raw unpasteurized eggs," said the CDC's Tauxe.

"I run the cutting boards through our dishwasher," he added.