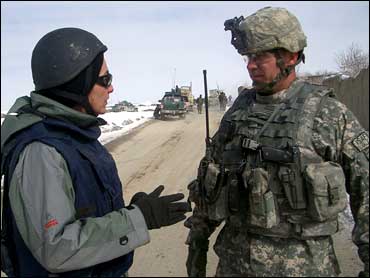 McCormick was traveling with members of the United States Army when the vehicle was hit by an improvised explosive device (IED). An American soldier in the same vehicle was killed.

McCormick was initially treated at a field hospital, where she underwent surgery to stabilize her condition, and was then transported to Bagram Air Base in Afghanistan for additional treatment.

McCormick joined CBS News in September, 1998. She has won numerous awards for her reporting on some of the biggest stories since that time. She was at Ground Zero on September 11, 2001, in New Orleans when Hurricane Katrina wiped out its levees, and in the Gulf region for the start of the war in Iraq.

Listen: Cami McCormick reports on the growing number of U.S. casualties in Afghanistan.

McCormick has traveled throughout Iraq many times since the U.S. invasion and has covered the Middle East for years. She was in Ramallah at the funeral for Palestinian leader Yasser Arafat. She reported from Nablus and Bethlehem during the Israeli incursions of 2001. She has also reported from Gaza and Beirut.

Prior to CBS, McCormick worked for CNN, CNN International, Headline News and CNNRadio. She reported on the death of Princess Diana from London and the deployment of U.S. troops to Bosnia.

She also developed, anchored and produced CNNRadio's first international newscast, The CNNRadio World News Report. Heard in more than 100 countries, it was the winner of the Edward R. Murrow award for "Best Network Newscast" in 1998.

Early in McCormick's career, she covered the fall of the Berlin Wall and the break-up of the Soviet Union. In the early 1990's, she worked as a reporter in Moscow and was one of the first English-language hosts on a commercial radio station in Russia.

McCormick has been the personal recipient of five Edward R. Murrow awards and a contributor to more than a half a dozen others. Other honors include two AWRT "Gracie Allen Awards" for September 11th and Iraq war coverage, two Associated Press Awards, a CableAce Award for reporting on Boris Yeltsin's re-election as Russian President and a Sigma Delta Chi Award for her coverage of Hurricane Katrina and its aftermath.