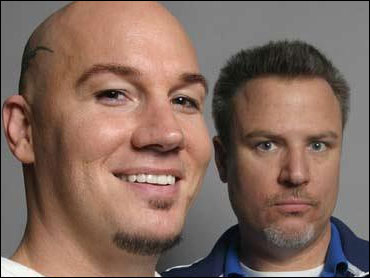 The hosts of the daily morning show, WFNY-FM's "The Dog House With JV and Elvis," have been suspended indefinitely without pay, CBS Radio spokeswoman Karen Mateo told The New York Times in an e-mail Monday. One of the hosts, Jeff Vandergrift, apologized on Monday's show, she said.

Local chapters of the Organization of Chinese Americans, an advocacy group, released a statement Sunday protesting the segment. By Monday, California State Sen. Leland Yee and others joined the campaign.

In the segment, broadcast on April 5 and again last week, a caller to a Chinese restaurant intersperses an order for takeout with lewd language and racial slurs.

The caller tells one female employee he wants to come to the restaurant to see her naked and refers to a part of her body as "hot, Asian, spicy."

The caller attempts to order "shrimp flied lice" and refers to a male employee as "Chinese man" before claiming himself to be a student of kung fu.

At one point he refers to a part of the employee's body as a "tiny egg roll."

The show's hosts, Vandergrift and Dan Lay, have been campaigning online and on the air in support of Imus since his firing for making sexist and racist comments about the Rutgers University women's basketball team.

Community advocates pushed for CBS to fire the hosts of the show, which can be heard only in the New York City area and on the Internet.

"If they don't fire the DJ's, it will be a double standard," said Vicki Shu Smolin, president of the New York City chapter of the Organization of Chinese Americans.

CBS Radio and CBSNews.com are both part of CBS Corp.