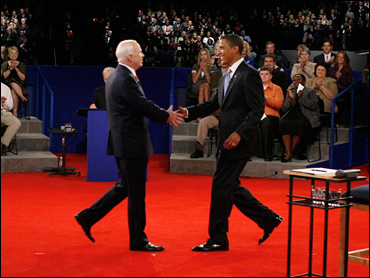 Uncommitted voters named Barack Obama as the winner of the second presidential debate as well, according to a CBS News/Knowledge Networks poll.

Immediately after the debate, CBS News interviewed a nationally representative sample of 516 debate watchers assembled by Knowledge Networks who were "uncommitted voters" - voters who are either undecided about who to vote for or who say they could still change their minds. Forty percent of these uncommitted debate watchers said Obama won the debate, 26 percent said John McCain won, and another 34 percent thought it was a tie.

In a similar poll conducted after the first debate, uncommitted voters also thought Obama was the winner.

The economy is now the most pressing national issue, and the first hour of the debate focused on economic questions. Uncommitted debate watchers see Obama the clear winner on handling the economy -- not only were his ratings on this issue higher than McCain's after the debate, but Obama also gained more from the debate on this issue.

The town hall format of this debate provided the candidates with an opportunity to connect with voters, and Obama was viewed as doing a much better job at that than McCain did. After the debate, nearly twice as many said Obama understood their needs as said McCain did. Both before and after the debate, majorities of uncommitted voters felt that Obama understands their needs and problems. And Obama rose far more than McCain did on this measure.

But when it came to the war in Iraq, which some voters asked about during the debate, McCain was the stronger candidate -- an advantage that has been consistent in CBS News Polls for many months. Before the debate, 55 percent of uncommitted voters said that McCain would make the right decisions about the war -- that rose to 61 percent after the debate. Less than half thought Obama would make the right decisions on Iraq.

Asked what they learned from the debate, many of those who thought Obama won volunteered that Obama was knowledgeable and specific on the issues - some mentioned his understanding of foreign policy, health care, and country's energy needs. Many felt that McCain was short on specifics, and was more negative and angry.

Voters who thought McCain won the debate said he was more candid and passionate. They felt that Obama didn't give direct answers, and that McCain was more to the point.

About one in three watchers said they learned nothing from the debate.

However, Obama is seen as the better candidate on bringing about change. Fifty-one percent said that before the debate, and 63 percent said so afterwards. Thirty-eight percent said McCain would bring real change after the debate, compared to 23 percent beforehand.

Forty-two percent of those uncommitted voters who watched the debate said that their image of Obama changed for the better as a result. Just 13 percent say their opinion of Obama got worse, and 45 percent reported no change in their opinions.

This CBS News poll was conducted online by Knowledge Networks among a nationwide random sample of 516 uncommitted voters - voters who don't yet know who they will vote for, or who have chosen a candidate but may still change their minds - who have agreed to watch the debate. Knowledge Networks, a market and public policy research firm based in Menlo Park, CA, conducted the web poll among a sample of adult members of its panel, who are provided web access if they don't already have it. More technical information is available at http://www.knowledgenetworks.com/ganp/reviewer-info.html.