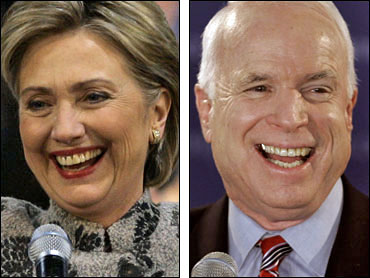 Surging after his win in the New Hampshire primary, Arizona Sen. John McCain has come from behind to now lead the national Republican race, according to a new CBS News/New York Times poll. However, among Democrats, New York Sen. Hillary Clinton has maintained her double-digit national lead in the race, despite winning only one of the two contests so far.

McCain is now the choice of 33 percent of Republican primary voters in the poll, up from just seven percent in the last CBS News/New York Times poll taken in December. Former Arkansas Governor Mike Huckabee is in second place with 18 percent, down from 21 percent in December. The biggest drop downward is in former New York Mayor Rudy Giuliani's support, from leading at 22 percent in the last poll to ten percent now. Former Massachusetts Governor Mitt Romney and former Tennessee Sen. Fred Thompson are tied in this poll at eight percent.

In the race for the Democratic nomination, Clinton leads Illinois Sen. Barack Obama by a margin of 42 percent to 27 percent. Former North Carolina Sen. John Edwards comes in a distant third at 11 percent.

There have been two different winners in two different Democratic nominating events, but nationally Democratic primary voters' preferences remain unchanged from the December CBS/New York Times Poll. In that poll, Clinton led Obama by a similar margin - 44 percent to 27 percent. Edwards likewise was in third place with 11 percent.

In the Republican race, many observers have wondered whether conservatives in the party (who make up the majority of primary voters) would embrace McCain, but in this poll he now leads among self-described conservatives with 31 percent to Huckabee's 17 percent. Among moderates, McCain leads by a similar margin.

McCain's jump in the poll can also be seen in a change in attitudes by Republican primary voters as to who is the most electable in the November general election. In the current poll, 41 percent of Republicans now view McCain as the most electable candidate. Last month, Giuliani led the field in this benchmark with 43 percent, but this month that dropped to 12 percent.

However, there are many indications this race is far from settled: 72 percent say they could still change their minds and fewer than half, (43 percent) "strongly" support their candidates. Only 20 percent of Republicans say they like their candidate "a lot better" than the other choices.

Nevertheless, Republican primary voters showed more satisfaction with their nomination choices than they had in previous surveys. Fifty-nine percent say they are satisfied with the choices, compared to 48 percent who said that in October, and just 36 percent in July.

In the Democratic race, Clinton's win in New Hampshire was due in part to strong support from women, while men in New Hampshire chose Obama. However, nationally, Clinton not only has a sizable lead among women, by 43 percent to Obama's 27 percent, but she also maintains a 11 point lead over Obama among men.

However, Obama has gained ground among voters under age 45 and black voters. With black voters, Obama is now the clear choice, leading Clinton 49 percent to 34 percent. In a CBS News Poll conducted last August, the two candidates ran about even among blacks. Obama leads Clinton among both black men and black women.

Although Clinton now outruns Obama among voters under age 45 by eight points, her lead is shrinking. In December, she led among this group by 20 points. She leads Obama by 20 points among voters age 45 and older, and has increased her lead since last month.

Partisanship also plays a factor in the race. Those who identify themselves as Democrats favor Clinton by a wide margin, while independents who intend to vote in a Democratic primary are more closely divided.

This poll was conducted among a random sample of 1178 adults nationwide, interviewed by telephone January 9-12, 2008. The error due to sampling for results based on the entire sample could be plus or minus three percentage points. The error for subgroups is higher. An oversample of African Americans was also conducted for this poll, for a total of 185 interviews among this group and 141 African American Democratic primary voters. The results were then weighted in proportion to the racial composition of the adult population in the U.S. Census. The margin of error for African Americans overall is plus or minus 7 percentage points, and plus or minus 8 points for African American Democratic primary voters.