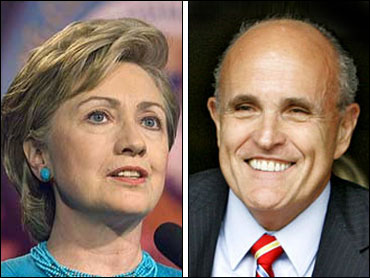 Sen. Hillary Clinton and former Mayor Rudy Giuliani continue to set the pace in the 2008 presidential race, according to the latest CBS News/New York Times poll, but both are facing some new challenges.

Giuliani's lead over his top Republican rivals is down, while his negative ratings are up; Clinton's lead over her Democratic opponents is up, but she's lost support to Sen. Barack Obama among critical African-American voters.

SATISFIED WITH YOUR PARTY'S PRESIDENTIAL CONTENDERS?

Looking at the Republican campaign, Giuliani's lead has slipped since last month in a three-way contest with Sen. John McCain and former Gov. Mitt Romney. The benefactors: Romney, and "none of the above."

Giuliani still leads the Republican pack at 36 percent, down from 47 percent a month ago. McCain is next at 22 percent, down 3 points since April. Romney is third at 15 percent, a 5-point increase from last month.

In another sign of GOP discontent with the current front-runners, the number saying they don't want any of those three rose 8 points to 21 percent.

IF THESE WERE THE CANDIDATES, WHO WOULD YOU WANT AS REP NOMINEE? (Among Republican Primary Voters)

Negative ratings for both McCain and Giuliani have risen. McCain's favorable ratings now are nearly even with his unfavorable ratings. Giuliani still gets mostly positive reviews, but his negatives are up, too.

Republican primary voters are becoming more familiar with Romney, and the result has been positive for him. He is viewed favorably by most of those who have an opinion.

The poll also looked at the volatile issue of abortion and found that Giuliani leads among the six in 10 Republican primary voters who would allow abortions in at least some form; he also leads, though by a much smaller margin, among the four in 10 who say no abortions should be permitted.

Giuliani is seen as the most moderate of the three top Republicans. Less than half of GOP primary voters say he shares Republican values.

On the Democratic side, Clinton has increased her lead over Obama, her top rival, to 22 points. Clinton is the choice of 46 percent of primary voters, followed by Obama at 24 percent and former Sen. John Edwards at 14 percent.

IF THESE WERE THE CANDIDATES, WHO WOULD YOU WANT AS DEMOCRATIC NOMINEE? (Among Democratic Primary Voters)

Clinton's support is 7 points higher than a month ago, while Obama's has remained steady and Edwards' has dropped 7 points.

This poll was conducted among a random sample of 1125 adults nationwide, interviewed by telephone May 18-23, 2007. The error due to sampling for results based on the entire sample could be plus or minus three percentage points. The error for subgroups is higher. An oversample of African Americans was also conducted for this poll, for a total of 192 interviews among this group. The results were then weighted in proportion to the racial composition of the adult population in the U.S. Census. The margin of error for African Americans is plus or minus 7 percentage points.