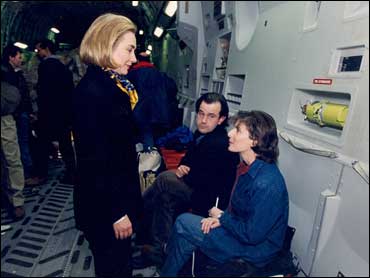 It was supposed to be an example of Hillary Rodham Clinton's battle-tested experience:

"I remember landing under sniper fire," Clinton said at a recent campaign event.

It started when, in a recent speech, Clinton spoke of her visit to Tuzla, Bosnia, in 1996 as first lady.

The brutal war was over, but hostilities continued. And though the trip was exactly 12 years ago Tuesday, the memories seemed etched in Clinton's mind.

"There was supposed to be some kind of a greeting ceremony at the airport, but instead we just ran with our heads down to get into the vehicles to get to our base," she said.

Problem is: that's not how it happened at all. And we should know: CBS News investigative correspondent Sharyl Attkisson and a CBS News crew accompanied the First Lady on that Bosnia trip.

A photograph shows Clinton talking to Attkisson on the military flight into Tuzla.

And pictures CBS News recorded show the greeting ceremony when the plane landed.

"I remember landing under sniper fire," she said. "There was no greeting ceremony and we were basically told to run to our cars. That is what happened."

Asked about the issue during a meeting with the Philadelphia Daily News' editorial board on Monday, Clinton said she "misspoke."

"I went to 80 countries, you know. I gave contemporaneous accounts, I wrote about a lot of this in my book. You know, I think that, a minor blip, you know, if I said something that, you know, I say a lot of things - millions of words a day - so if I misspoke, that was just a misstatement," she said.

A spokesman for rival Barack Obama's campaign questioned whether Clinton misspoke, saying her comments came in what appeared to be prepared remarks for the Iraq speech. His campaign's statement included a link to the speech on Clinton's campaign Web site with her account of running to the cars.

Clinton's campaign said what is on the Web site is not the prepared text, but a transcript of her remarks, including comments before the speech in which she talked about the trip to Bosnia.

Obama spokesman Tommy Vietor said in a written statement that Clinton's Bosnia story "joins a growing list of instances in which Senator Clinton has exaggerated her role in foreign and domestic policymaking."

Referring to the CBS News video, Clinton aides said Monday, it "was not quite as dramatic as Clinton put it."

"She meant that there was fire on the hillside around the area when we landed, which was the case," said Clinton campaign aide Lissa Muscatine.

Mike Allen of Politico.com said: "Who knows if she misremembered, misspoke, exaggerated, whatever. It makes the case for Sen. Obama that all this experience that she's been talking about is at least partly in her imagination."

Hundreds of thousands have viewed the video online in just the past few days.

There's a saying: Never let your memories be greater than your dreams.

When you're running for president, maybe it should be: never let your memories be greater than the video.