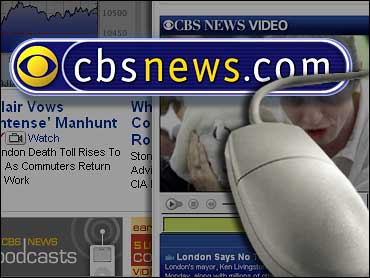 CBS News will move from a primarily television and radio news-based operation to a 24-hour, on-demand news service, available across many platforms, drawing on the experienced, worldwide, award-winning resources of the network.

Key elements of the new CBSNews.com site will include:

• Significant investment in CBS News and CBSNews.com as part of a "cable bypass" strategy designed to offer breaking news, free broadband-quality video and original reporting, commentary and analysis directly to the fastest-growing segment of news consumers -- those accessing news on the Internet. Projections indicate that homes connected to broadband will equal or surpass homes serviced by cable and satellite by 2010. During that time, the broadband delivery system will dramatically improve, resulting in a viewing experience equal to television. Furthermore, use of broadband connections during working hours -- when most top stories take place -- significantly outweighs that of cable and satellite.

• The debut of "Public Eye," a new blog that will create a candid and robust dialogue between CBS News journalists and the public -- a move unprecedented among CBS's peers in broadcast and cable television journalism. "Public Eye" will be edited by veteran reporter and media writer Vaughn Ververs, most recently editor of The Hotline, a daily Web briefing on politics published by the National Journal. Ververs will serve as the conduit between the public and CBS News to take viewers and users inside the news gathering, production and decision-making process via the use of original video and outtakes, interviews with correspondents and producers, and input from independent experts, among other methods. "Public Eye" will debut by late summer.

• A fully redesigned home page featuring The EyeBox, an on-page video player which makes breaking news video immediately available. Users can build their own newscast, choosing from exclusive Web content, the current day's CBS News broadcasts, its archive of more than 25,000 news pieces, or in many cases, video that has yet to be broadcast. CBSNews.com will continue to offer all video for free in both of the two most popular player formats, Real Video and Windows Media. All CBS News video is encoded for full-screen viewing.

• True integration between CBS News and CBSNews.com staffed by reporters committed to 24-hour news delivery. CBSNews.com will add more exclusive, original reporting and commentary from CBS News. Throughout the day, CBS News correspondents around the world will file, update and expand their stories, continuously enriching the editorial content by providing more insight and context. CBS Evening News anchor Bob Schieffer will host a daily online version of his television broadcast and CBS News' White House correspondents -- John Roberts, Bill Plante and Mark Knoller -- will produce weekly features to address viewers' and users' questions about their beat. Early Show Anchors Harry Smith, Hannah Storm, Julie Chen and Rene Syler will also provide online programming. Additionally, "Listening Post," the site's web-exclusive look at issues around the world and why they're important, will be expanded with reporting from Baghdad, Tokyo, Rome, Tel Aviv and London, among other newsworthy locations.

"This major expansion of CBSNews.com is designed to capture an audience that is increasingly looking for news and information at all times of the day, not just during scheduled periods, and using the Internet for that purpose," said Kramer. "Every component of this re-launch -- including greatly enhanced video streaming capabilities, more on-demand features and greater participation from the CBS News correspondents and producers who will also be reporting directly for the web -- will dramatically improve the content, delivery and navigation of the website. I'm confident that with the unparalleled excellence that is CBS News and its people, CBSNews.com will become the premier news destination site in what has become a 24-hour information world."

"This represents a significant shift for CBS News," said Heyward. "We are redefining the mission of CBS News and the people who work here to meet the demands of a 24-hour digital universe. In addition to producing award-winning television and radio news programming, beginning today we are transforming our 24-hour newsgathering capability into a true on-demand news service on the Internet -- dedicating our worldwide resources to providing competitive breaking-news coverage and distinctive original reporting, analysis and commentary to a young and growing audience of news consumers. And importantly, our new blog presents a wholly new effort at transparency in the newsgathering process."

Heyward added, "We've got the resources to make this work. We're adding more people and technology to make sure that CBSNews.com is the immediate first choice of Internet users who are looking for independent, trustworthy news reporting and comment."

CBS News is part of CBS Television, a unit of Viacom Inc. (NYSE: VIA and VIA.B).