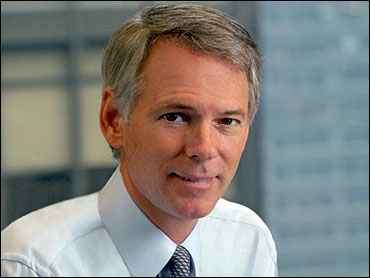 CBS News President Andrew Heyward announced Wednesday he would be leaving his post when his contract expires at the end of the year. Heyward will be replaced by CBS Sports President Sean McManus.

"After nearly ten years in this job … it's time for a change, both for the news division and for me," Heyward wrote in an e-mail to CBS News staff. Heyward is the second-longest serving CBS News president in history. Richard Salant ranks first.

McManus takes the reins of the news division Nov. 7, when Heyward is expected to begin coaching him on his new role. McManus will meanwhile retain his position as president of CBS Sports, which he has held since 1996.

Heyward has been with CBS for 24 years in various roles, including executive producer of the CBS Evening News and vice president of CBS News. Heyward said he will stick around until the end of the year, making himself available to the new president as an advisor as needed.

CBS Chairman Les Moonves praised Heyward upon the announcement of his departure.

"He is, quite simply, a man of great character, whose integrity and experience has guided our News division through a time of tremendous change, and I want to thank him for his unwavering commitment to the core values of journalism, and for his years of creativity, dedication and loyalty to this company," Moonves said in a message to CBS employees.

"Sean McManus is a superb executive, a great leader and a fierce competitor whose pedigree for excellence in live-event programming is well-known," Moonves said of the incoming president.

"I'm very excited about the opportunities that lie head," McManus said in a news release. "CBS News is a truly great institution, and its people have defined excellence in broadcast journalism since the beginning of the medium."

During his time at CBS Sports, McManus, son of famed sportscaster Jim McKay, transformed it into the No. 1 broadcast organization of its kind in the industry. McManus, who will continue to be based in New York, will keep offices at the headquarters of both CBS Sports and CBS News, although he will spend the majority of his time at CBS News for the foreseeable future.

"The business is changing and the challenges are many," McManus said. "I'm confident that, while maintaining the standards and values of this great organization, we can build upon its legacy and become even more successful, competitive and relevant to the viewers and the nation we serve."

Recently, Heyward has steered CBS News through choppy water, including the cancellation of 60 Minutes Wednesday, a news program he initiated, the broadcast of disputed documents pertaining to President Bush's National guard service that led to the dismissal of the story's producer and the resignation of three other CBS News personnel and long-time anchor Dan Rather's departure from the CBS Evening News.

Bob Schieffer now sits in the CBS Evening News anchor chair, and it is assumed that a new Evening News format is being planned.

"This is terrific news ... Sean is a good executive with a great track record but more than that, I know him to be a person who has great respect for CBS News and what it has always stood for," Schieffer wrote in an e-mail. "I am going to miss Andrew Heyward, my good friend of two decades. He can be proud of many things he did here, but I have thought for a long time that he wanted to move on to a new challenge."

"My colleagues at CBS have enriched my life beyond measure, through challenging times and triumphs alike," Heyward wrote in a memo to staff.

"As for my own plans, I do not intend to 'pursue other interests' or even 'spend more time with my family,' wonderful as it is. I am going to remain fully engaged in the media business," he added.

Under Heyward's leadership, the division has been recognized with many of the industry's highest honors, including: 57 News and Documentary Emmy Awards, 13 Peabody Awards, 13 Alfred I. duPont/Columbia University Awards, six Overseas Press Club Awards and 46 Edward R. Murrow Awards.

Listen to Heyward's speech last week as he accepted an Edward R. Murrow Award for overall excellence in news coverage by CBS News.

In an interview with Public Eye, Heyward said that he feels confident that McManus will draw upon his experience to strengthen the news division.

"One thing Sean brings is his competitiveness and his record of leadership, and I think it's reassuring to people here that you have somebody who does understand CBS and what the CBS name represents," Heyward said.

Public Eye also asked the incoming president how he responded to those who question his lack of "hard news" experience. McManus said he understands that producing a Masters or a Super Bowl is not the same as a convention, Supreme Court hearing or live news event, but said that many of the "lessons I've learned about story-telling and reporting are transferable" to news.

McManus began his career in 1977 at ABC Sports, where he was a production assistant and associate producer. He joined NBC Sports in 1979 and by 1982, McManus became the youngest vice president in the history of NBC.

McManus joined CBS in 1996 from Trans World International, where he was senior vice president of U.S. television sales and programming.