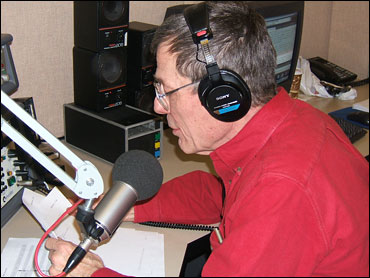 Christopher Glenn, a CBS News correspondent for 35 years who anchored numerous programs and broadcasts including the 1986 coverage of the space shuttle Challenger explosion, has died of liver cancer at the age of 68.

Glenn, who retired in February and is to be inducted in the Radio Hall of Fame next month, died Tuesday at Norwalk Hospital near his home in Connecticut.

"For those of us in the radio news business," says CBS News White House correspondent Mark Knoller, "Christopher Glenn was a titan. His journalistic acumen, his writing skill, his authoritativeness were unmatched. He set high standards for himself and his reporting - but he was also down to earth and had a great sense of humor. It was a milestone for me the first time I appeared in one of his hourly newscasts."

"One of my earliest and fondest recollections of Chris Glenn," says Knoller, "dates back to the late 60s and early 70s and his days as an anchor at WNEW radio in New York. He wrote and narrated a documentary about the rumor that Beatle Paul McCartney had died. It was skillfully written and cleverly produced and to this day, that documentary is a collector's item in the radio news business."

Most recently the anchor of CBS Radio's flagship newscast, The World News Roundup, the longest-running news program in broadcasting, Glenn once said he had "done just about everything there is to do, from producing to writing to reporting in the field and anchoring and writing inside."

In his own words: Christopher Glenn, in an interview last February, talked about in history, and, the thing that during his career at CBS.

What was his favorite role at CBS News?

"I would be hard-pressed to say. I've had a great deal of enjoyment from the jobs that took me into the field as a reporter, but I've also very much enjoyed being an anchor the last ten to fifteen years of my career," he told CBSNews.com upon his retirement.

In addition to two editions of the Roundup, Glenn also wrote and anchored several hourly newscasts each day.

Glenn produced, wrote and narrated the daily CBS Radio Network broadcast What's in the News since its inception in 1995. He also anchored and reported coverage of dozens of space shuttle missions, national political conventions and many other major news stories.

One of those space shuttle missions was particularly memorable, he said.

"Definitely being there when in front of my face in 1986. I had to get back on the air real fast to describe that, and had a very difficult time doing that," said Glenn, in an interview after announcing his retirement. "It was a very, very emotional moment — probably the most emotional of my career. It was tough to keep it under control while I was doing the broadcast."

He did - and uttered the words that so many were thinking: "A great tragedy here. This flight, which was to have been such a bright chapter in the history of the manned space flight program, turning in the flash of an instant into a terrible, terrible tragedy."

Another memorable story for Glenn was a happier moment in history - the 1984 Democratic national convention, when Geraldine Ferraro became the first female vice presidential candidate. "People standing up, locking arms and rocking back and forth, and singing and cheering and clapping," Glenn recalled as he looked back on his career last winter.

Glenn also handled numerous assignments for CBS Television. He was the reporter/narrator for the over 5,000 broadcasts of the Emmy Award-winning program In The News, aimed at kids and sandwiched between entertainment programs on Saturday mornings from 1971 through 1986.

"We're a little didactic, we try to teach in some way," Glenn said of the series he pointed to as by far the thing he was most proud of during his career. "A surprise bonus," he said, was the adults who tuned in, many telling him that they really understood a news event for the first time after watching "In the News."

He was co-anchor and interviewer for CBS News Nightwatch, an overnight four-hour news and information broadcast on CBS-TV from its debut in 1982 until 1984.

"My personal preference would be radio, I think," he said. "That's where I started, and I've always thought that the medium was especially good for communicating with audiences because you don't just have to sit there and stare at the pictures. You have to tell them the story and make them understand, and I think that that's much more of a challenge for a journalist, and it makes it more interesting in the long run."

Prior to joining CBS News, Glenn was managing editor of the Metromedia Radio News Network in Washington, D.C., (1970-1971) and a reporter/editor/documentary producer for WNEW Radio in New York from 1964 to 1970. He also worked for the news departments of WICC Radio in Bridgeport, Conn., Radio Press International in New York and Armed Forces Broadcasting in Korea and New York City.

"I've been doing it, in the business, at least, for about 50 years, 35 here. Done it all, seen a lot, had a very good time, very few disappointments, very few bad days if you want to put it that way, and I'm sorry to go, but it's time now," he told CBSNews.com in February.

A native New Yorker, Glenn received a B.A. degree from the University of Colorado in 1959.

His advice for young broadcast journalists just starting their careers was:

He is survived by his wife, Dianne; daughters Rebecca and Lindsey; and a sister, Patricia Rooney.