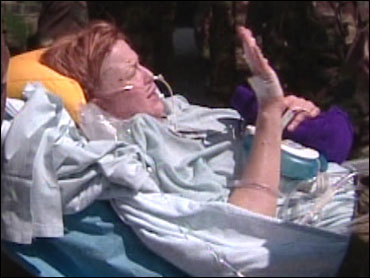 CBS News correspondent Kimberly Dozier, who was injured in Iraq, returned to the United States Tuesday. Her transport plane landed at Andrews Air Force Base shortly after 4 p.m.

Dozier, 39, was one of 40 patients on the medical transport flight, and arrived at the base in critical but stable condition, CBS' Bianca Solorzano reports. She will be admitted to Bethesda Naval Hospital near Washington.

Dozier is still in critical but stable condition, reports CBS News correspondent Sheila MacVicar. She was critically wounded May 29 while reporting a story in Iraq in a blast that killed her camera crew — Britons Paul Douglas and James Brolan — as well as a U.S. soldier and an Iraqi translator.

She was flown the following day to Landstuhl Regional Medical Center, in Germany, for treatment of head and lower body injuries.

She arrived Wednesday at Ramstein Air Base in a military ambulance and was wheeled onto a C-17 aircraft configured for medical evacuations in a stretcher, one of about 40 patients being flown to Andrews Air Force Base in Maryland, Air Force Capt. Chrystal Smith said.

Her trip to the United States was delayed until transport was available, but "there's been a upside to the delays," reports CBS News correspondent Elaine Cobbe. "She's stronger now and more able to face the eight-hour flight."

When Dozier was brought to Germany from Iraq last Tuesday, she was heavily sedated, on a ventilator, and had just had surgery to her head and legs. Her wounds were classed as very serious, and U.S. military doctors who treated her in Baghdad feared they would lose her.

"When she came she was pretty banged up," Col. Bryan Gamble, commander of the Landstuhl Regional Medical Center, told MacVicar. "Since that time she's made what I think is some pretty good progress. She still has a long road ahead, but I think its promising."

She can now talk to her family and her doctors and ask questions about her treatment. She's had more surgery on her fractured legs, she can eat solid food. She now faces months of recovery and rehabilitation.

She has also had to learn of the deaths of her crew, cameraman Paul Douglas and soundman James Brolan. She has told her doctors she remembers the explosion, the car bomb which killed the CBS team, a U.S. soldier, and an Iraqi translator, and so seriously wounded her and other American soldiers.

CBS News vice president Linda Mason reports that Dozier was in great spirits and was talking animatedly as she was brought aboard the plane.

"Phase 1 was to save her life, which they did here. Phase 2 is to start remolding her life, fixing her legs so that she can walk, fixing her spirit so she can live a carefree life," said Mason. "It's all going to take time."

Douglas, 48, and Brolan, 42, died at the scene of the explosion, which also wounded six U.S. soldiers. The soldier killed has been identified as Army Capt. James Funkhouser, 35, who had been in Iraq only a few months, and leaves behind a wife, Jennifer, and two daughters, Caitlyn and Allison.