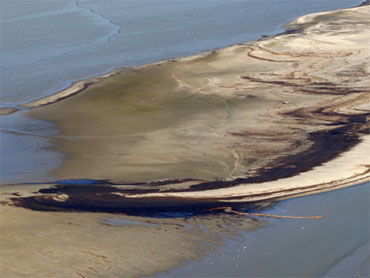 The 10 toss-up state are the big prizes of Florida, Pennsylvania and Ohio; the upper Midwest "blue states" of Iowa, Minnesota and Wisconsin; two states out west, New Mexico and Nevada; New Hampshire in the Northeast; and, finally, the industrial state of Michigan.

Michigan, which Al Gore won in 2000, has gotten closer in the past week and has gone from leaning toward Kerry to a toss-up.

At the same time Ohio, which is still a toss-up, has started to move a bit toward the Kerry column. The Bush campaign is hedging its bets on Ohio. The campaign has made a decision to go back on the air heavily in Michigan and President Bush was in Saginaw on Thursday. Senator Kerry has added stops in Michigan to his final week and will go to Detroit on election eve.

There are a number of states "on the bubble". Arkansas and West Virginia which have been leaning toward President Bush are looking a little less red; and Hawaii, which most believed was solidly in the Kerry column, is now just leaning toward the Democrat.

It's as close as it gets.

We will continue to watch the polls as the undecideds finally decide and will update our count up until Election Day.

Editor's Note: This analysis is not a prediction but an estimate of the race as it stands now. It is based on analysis of where the campaigns are allocating resources and buying television and radio ads, on past election results, on interviews with campaigns and independent experts and on polling. In addition to CBS News polls, this analysis utilizes polls from private and public sources. These include Mason-Dixon, L.A. Times, Gallup/CNN, Ipsos Public Affairs, Quinnipiac, Marist, ABC News, Research 2000, ARG, and Zogby, as well as state polls conducted for individual newspapers in each state.
View CBS News In
CBS News App Open
Chrome Safari Continue
Be the first to know
Get browser notifications for breaking news, live events, and exclusive reporting.