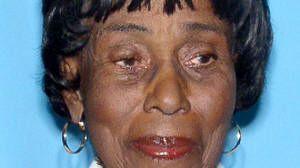 James’ body was found in a shallow grave Wednesday after she was reported missing under suspicious circumstances. An autopsy revealed that the woman was beaten and stabbed to death in what police allege was a robbery for drug money.

Krystopher Laws, 21, and Joshua McClellan, 19, were denied bond during their first appearances before a judge Saturday morning.

According to the affidavits, deputies responded to James’ home in Leesburg, Florida around 3 p.m. Wednesday. This was after a woman who said she checks in on James at her home almost daily told deputies she hadn’t seen the 92-year-old since Monday. The woman last spoke with James on the phone early Tuesday morning.

The woman told deputies that when she arrived at James’s home, she found James’ house slipper and glasses on the front porch, along with two plants lying on their sides instead of sitting upright, which was “very uncharacteristic for Ms. James’ residence,” the sheriff’s office said.

Deputies said they found a large amount of blood at the front and throughout the home, along with drag marks.

The woman who checked on James told deputies that there should be a white car in the garage, according to the affidavit. Deputies said there was no vehicle inside the garage.

Just before 8 p.m., deputies learned James’ vehicle had been found in a Leesburg neighborhood about five miles away.

Deputies found that James’ vehicle had blood on the outside of it, sheriff’s officials said. Deputies said they also found a knife sitting on the center console of the car.

Deputies then conducted a walk with a K-9. Deputies said the K-9 made a positive alert on the trunk area of James’ car. They then opened the trunk and found a “blood-like stain,” but did not find James inside of the vehicle, according to the affidavit.

Detectives found tire tracks leading into a nearby wooded area, deputies said. The K-9 then conducted a track through the wooded area and found James’ body, the Sheriff’s Office said.

James was taken to the Lake County Medical Examiner’s Office, where an autopsy was conducted. The autopsy revealed that James’ cause of death was “multiple sharp and blunt force injuries,” and was ruled a homicide, according to the affidavit.

McClellan’s mother brought both of the men to the Leesburg Police Department Friday night, where they spoke with detectives, deputies said.

The mother told detectives that her son and Laws found James’ vehicle in a parking garage near a library in Leesburg and stole it, deputies said.

McClellan allegedly admitted to detectives that he was with Laws when the vehicle was stolen, and that while inside the vehicle, he lent his pocket knife to Laws, who then cut himself and left blood in James’ car, the affidavit said. Deputies said detectives showed McClellan a picture of a sweater that was found in James’ home, which he identified as being Laws’ sweater. McClellan also allegedly told deputies that he knew James because he had done lawn work for her, deputies said.

Detectives then spoke with Laws, who allegedly admitted that he and McClellan had walked to James’ house to get money for drugs, the sheriff’s office said. Once James opened the front door, the men walked in, struck James in the head, which caused her to fall to the ground, and stabbed her multiple times, according to the affidavit.

The men then allegedly dragged James’ body to her car in the garage and placed her in the trunk before driving to the neighborhood where her car was later found, where they buried her body in the wooded area behind McClellan’s house, deputies said.

Laws allegedly told detectives “they only got $70 cash from the residence,” and that they had already spent it on marijuana.

Laws and McClellan are scheduled to go before a judge again March 6.