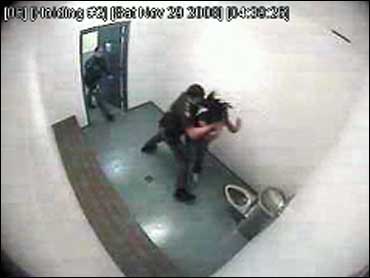 Surveillance video released in an assault case against a King County sheriff's deputy shows a deputy kicking a 15-year-old girl, slamming her to the floor of a jail cell, striking her and pulling her hair.

The footage shows the attack beginning after the girl enters the cell and kicks off one of her shoes toward the deputy.

The video released Friday is part of an assault case in which Deputy Paul Schene, 31, is accused of using excessive force on the girl, who was being held in a cell at the suburban SeaTac City Hall. Schene, who is charged with fourth-degree assault, pleaded not guilty on Thursday in Superior Court.

The incident last November began after the girl was brought in for an auto theft investigation, according to court documents.

"We believe this case is beyond just police misconduct, it's criminal misconduct," King County Prosecutor Daniel Satterberg said. "This is clearly excessive force."

Satterberg added the case is uncommon because cameras captured the entire incident.

Schene was investigated previously for shooting two people - killing one - in the line of duty in 2002 and 2006. Both times his actions were found to be justified, said Ian Goodhew, prosecutor's deputy chief of staff.

Associated Press calls to Schene's lawyer Anne Bremner were not immediately returned Friday. Bremner, however, released a statement to the Seattle Post-Intelligencer in which she said the video does not tell the whole story. Bremner had asked Judge Catherine Shaffer to not release the video to the media.

"As we argued to the judge, it will inflame public opinion and will severely impact the deputy's right to a fair trial," Bremner said.

The second officer shown in the video was a trainee at the time and is not under investigation, Goodhew said.

According to court documents, the girl complained of breathing problems after the incident and medics were called to check her. A short time later, she was taken to a youth detention center and booked for investigation of auto theft and third-degree assault, the latter accusation dealing with her conduct toward the deputy. The girl has pleaded not guilty to taking a motor vehicle without permission, Goodhew said Friday, adding she was never formally charged with assault.

Schene told investigators through an e-mail conversation with his lawyer that once he was assaulted by the girl kicking her shoe at him, he entered the cell to "prevent another assault," according to court documents. Schene also said that the girl failed to comply with instructions in the holding area.

Prosecutors said Schene did not explain why he struck the girl after he had her in a holding position on the floor.
By Associated Press Writer Manuel Valdes