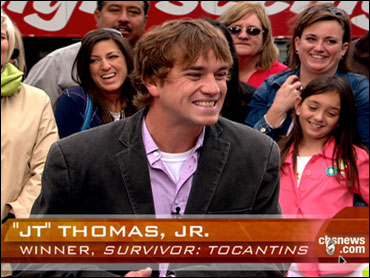 And Monday on The Early Show, Thomas received his $1 million payoff for the big win.

Asked by co-anchor Magie Rodriguez what it feels like to be the winner, Thomas said, "It feels like a million dollars, it really does. ... I never in a million years thought it would be a unanimous decision."

Thomas, who operates a cattle-ranching business in Samson, Ala., wept tears of joy after hearing the result on "Survivor" Sunday night.

"I can't help it," he said at the post-game special, aired live from New York. "I'm happy -- it's probably the happiest I've ever been in my life, obviously."

The winner was chosen by a seven-member jury of "Survivor" peers.

Thomas called Fishbach, a corporate consultant and Yale graduate, one of the best friends he'll "probably ever have" in life. The two formed a strategic -- and unlikely -- alliance early on in the show, making promises to take each other to the final tribal council.

Once there, however, their bond was tested as they presented their cases to the jury. Thomas, who picked Fishbach over chatty hairstylist Erinn Lobdell after winning immunity, was surprised when Fishbach revealed to the jury that -- had he been in his ally's place -- he'd have chosen the weaker Lobdell as a power play to win the show.

That betrayal of trust? Water under the bridge.

"It was something I wrestled with a lot ... It felt horrible to come clean with that," Fishbach recalled.

Laughing, Thomas said he pretended to be hurt so he could "pull some votes" in his favor.

The 18th edition of the CBS castaway competition was set in the rugged interior of Brazil, where 16 players congregated when the season began.

Too Long In The Diaper?