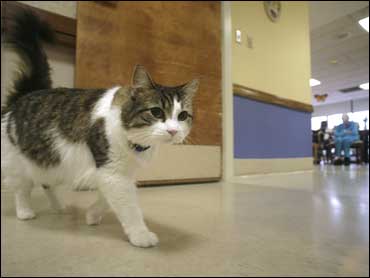 Predicting the death of a patient, even an elderly, demented one, is an inexact science, even for a doctor with decades of medical experience.

But a cat in a Providence, R.I., nursing home, an animal shelter refugee named Oscar, seems to have a sixth sense about when residents in the home's advanced dementia unit are about to pass away. And his actions can sometimes
help alert the staff to notify family members in time for them to get to the nursing home to tell their loved ones goodbye.

When he senses their time is near, Oscar goes to the room, jumps onto the bed, curls up next to the patient, and purrs. The 2-year-old cat provides
welcome company for grieving family members and staff keeping their bedside
vigil; sometimes he fills in for family members who haven't yet arrived at the bedside.

So far, Oscar has "presided over" the deaths of more than 25 residents in the advanced dementia unit of the Steere House Nursing and Rehabilitation Center. Although the story sounds far-fetched, David M. Dosa, MD, MPH, a geriatrician who cares for patients at the nursing home, thought it was time the story of Oscar was heard.

Only On The Web: More with Oscar the cat

On a whim, he wrote an essay about Oscar and submitted it to TheNew England Journal of Medicine, known more for its scientific reports on chemotherapy regimens, drug reactions, infections, and heart defects than reports on feline behavior.

"I was quite surprised they agreed to publish it," he tells WebMD. "It is not usually the type of article they will publish." The saga of Oscar, complete with his photo, is in the July 26 issue of the journal.

From Shelter Resident to Star

Oscar's been living at Steere House since he was a young kitten and staff members bailed him out of a nearby animal shelter. "I first heard about him
from the nurses on the unit," says Dosa, also a geriatrician at Rhode Island Hospital and an assistant professor of medicine at the Warren Alpert
Medical School of Brown University, Providence, R.I. "It came to light that
he was spending time with patients as they were becoming terminal."

The cat, Dosa says, seems to snap to attention when he senses a patient is about to die. In the essay, for instance, Dosa tells of Oscar arriving at the room of a woman and curling up beside her for more than an hour, purring and paying attention to the patient as the family arrives and the priest gives last rites, then quietly taking his leave minutes after the woman passes away.

"As people would pass, the question [among staff] was always, 'Was Oscar at the bedside?'" Dosa tells WebMD. "And the answer was invariably 'yes.' This is an end-stage dementia unit. Deaths are common."

Oscar typically arrives at a dying patient's bedside a few hours before death, Dosa says, but sometimes a half day before. His presence has been
a comfort to many family members, Dosa says. And his presence, coupled with a resident's worsening state of health, can help alert the nursing home staff to let family members know the patient may be nearing death. As Oscar's reputation grew, so did appreciation for his mission. "The largest
hospice organization in the state presented him with a certificate b&
acknowledging his work," Dosa says.

How Does He Know?

Explaining Oscar's track record and seeming ability to "read" a resident's end-of-life stages and predict death is a mystery, Dosa and others at the nursing home acknowledge. "Your guess is as good as mine," Dosa says when asked how Oscar picks up the sense of impending death.

"We know from some objective findings when death is imminent," Dosa says. For instance, if respirations grow difficult in a very sick patient, he says, doctors may tell loved ones death will probably occur soon.

The cat, however, might be picking up on specific odors surrounding death,
Dosa and other says.

"I think there are certain chemicals released when somene is dying, and he is smelling and sensing those," says Joan Teno, MD, professor of community health and medicine at the Warren Alpert Medical School of Brown University, Providence, R.I., who also cares for Steere House residents.

Another possibility: "I think he is following the patterning behavior of the staff," Teno tells WebMD. "This is an excellent nursing home. If a dying person is alone, the staff will actually go in so the patient is not
alone. They will hold a vigil."

Oscar has seen that pattern repeated many times, she says, and may be
mimicking it.

"Animals are intuitive," she says. "We don't give them enough credit."

One of the first cases, Teno says, involved a resident who had a blood clot
in her leg. "Her leg was ice cold," Teno says. "Oscar wrapped his body around her leg," she says, and stayed until the woman died.

Three animal behavior experts say the explanation about Oscar sensing a smell associated with dying is a plausible one.

"I suspect he is smelling some chemical released just before dying," says Margie Scherk, DVM, president of the American Association of Feline Practitioners, an organization devoted to improving the health and well-being of cats, and a veterinarian in Vancouver, British Columbia. "Cats can smell a lot of things we can't," she says. "And cats can certainly detect
illness."

"Cats have a superb sense of smell," adds Jill Goldman, PhD, a certified applied animal behaviorist in Laguna Beach, Calif. In Oscar's case, she says, keeping a dying resident company may also be learned behavior. "There has been ample opportunity for him to make an association between 'that' smell [and death]," she says.

While the sense of smell may be one explanation, there could be another,
says Daniel Estep, PhD, a certified applied animal behaviorist in Littleton,
Colo. "One of the things that happen with people who are dying is that they
are not moving around much. Maybe the cat is picking up on the fact that the
person on the bed is very quiet. It may not be smell or sounds, but just the
lack of movement."