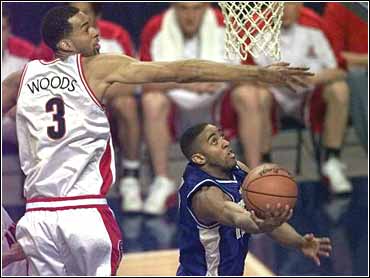 In a parable team leader Eugene Edgerson used to inspire the players, a coffee bean grows richer and stronger when thrown in boiling water.

The Wildcats are on the brink of a national championship after enduring a season of sorrow.

The coach's wife died and the basketball office secretary was diagnosed with a brain tumor. There were problems on the court, too: the star center was suspended for six games and a team ranked No. 1 in the country started an awful 8-5.

"This year I've learned more about life than I have about basketball," reserve forward Justin Wessel said.

It was no surprise this assemblage of remarkable talent was the preseason No. 1. All five starters were nominated for the John Wooden player of the year award, the first time that's happened in the award's 24-year history.

Center Loren Woods went so far as to call the Wildcats potentially the best college team ever.

Their preseason cockiness is gone now, replaced by a cool confidence born of adversity. They play Duke for the title on Monday night.

"We have such a calm about us," Richard Jefferson said. "Our team really does, because we've been through everything we could possibly go through."

The NCAA suspended Woods for the first six games of the season for accepting improper benefits from a family friend. Jefferson was suspended for one game for accepting a plane ticket to San Diego and a ticket to Game 7 of the NBA Finals from Bill Walton, whose son Luke is Jefferson's best friend.
Gilbert Arenas was yanked from the starting lineup three times for what coach Lute Olson considered a lack of defensive effort. Woods was benched for a game for bad behavior in practice.

During the Christmas holidays, basketball secretary Monica Armenta had a seizure as a result of a brain tumor. Then, on Jan. 1, Bobbi Olson died of ovarian cancer.

Her death shook the team, then fueled its run toward the title.

"That her spirit is affecting the team is obvious," Olson said.

Outgoing and good-natured, Mrs. Olson offset her husband's sometimes stern demeanor. She would wink at players after her husband had berated them, then mentioned what a bear he could be. Homesick or otherwise troubled, the players were welcomed into her home.

"When Mrs. O passed away, we lost a part of our family because she was the mother to us," Jefferson said.

The McKale Center court was renamed Lute & Bobbi Olson Court. Her memorial service was televised live throughout Tucson. Jefferson and Wessel were among the speakers.

"Everything now seems easy compared to that," Jefferson said. "Playing in a national championship has special meaning, but it doesn't have the same importance as speaking at Mrs. O's funeral."

On Dec. 30, the usually stoic coach Olson wept as he told his players he would take a leave of absence to be with his wife. That night, Mississippi State beat Arizona, the first time the Wildcats had lost in their own Fiesta Bowl Holiday Classic.

Three days after Mrs. Olson died, Arizona beat California, but a frustrated Woods was ejected and had to be held back from attacking referee Charlie Range. Two days later, on Jan. 6, Arizona lost at home to Stanford to fall to 8-5.

The Wildcats won the next two at Washington State and Washington to start a run that has reached 20-2. The following week against Southern California, Olson made an emotional return.

Now they are in Minneapolis, where coach Olson went to college and the couple started their family.

Olson's family - five children and 14 grandchildren - has helped him through his grief.

"They've known that they needed to prop me up a little bit," Olson said. "It's not been easy for any of us, but it's through family and friends I think we've all been able to survive this."

Before the semifinal game against Michigan State on Saturday, Edgerson read an e-mail he had received from a friend about the story of a young girl who was upset with the struggles of life.

Her father boiled a pot of water, and tossed in a carrot, egg and coffee bean. The carrot became soft. The egg cracked under pressure and was soft inside. But the coffee bean emerged richer and stronger.

Arizona beat the Spartans, the defending national champions, 80-61 in its best game of the season. Now the Wildcats are a victory away from their own championship.

"It would be so sweet for uto finally get that trophy," Edgerson said. "We can all just be at peace after that."