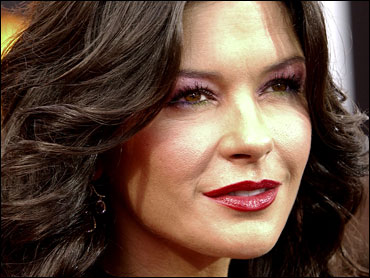 "Years ago if someone said they were doing a movie in Romania, I was, like, 'What time is my flight?' I couldn't see beyond the script," the 37-year-old actress tells InStyle magazine in its July issue, on newsstands Friday. "Now I'm like, 'Script? I'll figure that out after dealing with the people I love more than anything in the world."'

Zeta-Jones, who won a 2003 supporting actress Oscar for her role in "Chicago," married Douglas in 2000. They have two children — son, Dylan, 6, and daughter, Carys, 4 — and live much of the year on the island of Bermuda.

The couple also have homes in Manhattan and Majorca, Spain, and a farm in Quebec, Canada. "Some people collect art," she says. "We collect houses."

But Zeta-Jones, whose movie credits also include "Ocean's Twelve" and "Traffic," isn't about to quit acting just yet. In the upcoming dramedy "No Reservations," she portrays a chef whose life takes a new turn when she becomes the guardian of a 9-year-old niece. She's also wrapped up "Death Defying Acts," about Harry Houdini.

"At a certain age in Hollywood, you have to find the material you want to do," she says.