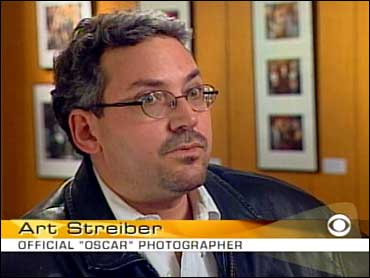 Hollywood's elite are getting ready for its most glamorous event of the year, next weekend's Academy Awards.

On the big night, fans aren't only interested in who wins. A big part for many is seeing arriving stars walking down the red carpet.

And The Early Show National Correspondent Hattie Kauffman spoke with a photographer who prides himself in capturing the stars when their spirits are up, and their guard down.

We're used to seeing photo of celebrities looking cool and calm on the red carpet, she points out.

But, she says, many are actually giving the performance of a lifetime, filled with adrenaline and nerves.

Rachel Griffiths, a 1998 Oscar nominee, says, "Nothing prepares you for that Red Carpet, and how absolutely insane it is. Insane!"

What would it be like to be a "fly on the wall," catching the stars when they think no one is looking?

That, says Kauffman, is Art Streiber's assignment. For the past five years, as Oscar's official photographer, he's had an "all access" pass.

"I'm trying to find moments backstage that kind of shed some light on, what is it like behind the curtain?" he told Kauffman.

Oscar headquarters in Beverly Hills, Calif. has raised now the curtain on a special exhibit of Streiber's photos.

The lobby is filled with 120 of the artist's most prized pictures.

Streiber dubbed one, "When A-Listers collide." He explains that, "Julia Roberts had just presented Denzel Washington with his Best Actor Oscar, and Mel Gibson and Tom Hanks were presenting."

"Do you have a sense," Kauffman asked, "of, 'Look who I'm standing in front of? This is Denzel Washington, Julia Roberts, Tom Hanks?' "

"Uh, in a situation like this, where there's more than two, yes!" Streiber responded.

A sign says, "Credentials must be in plain view at all times." Not when you're Jack Nicholson and Nicolas Cage!

"It doesn't matter how big the celebrity is," Streiber observed, "this is the biggest award that they can achieve, and it's something they've worked for and worked for."

One shot of Charlize Theron after the won for "Monster" shows her very together.

But another photo of her behind the curtain, moments later is, as Kauffman says, "incredible. You see how overwhelmed she is."

That whirlwind includes instances caught by Streiber, such as Julia Roberts dashing through a hallway, another star seen from behind facing hundreds more photographers, and Brian Grazer relaxing on a stairway with his Oscar, after the 2001 ceremony.

"It's kind of beyond mind blowing," Glazer says.

"I thought I was handling the pressure of it very well," director Ron Howard, another 2001 winner, recalls. "And then once the evening was over, I realized I had this gripping pain in my stomach and back. I had just been tense for four-and-a-half hours."

Asked by Kaufman what he'd like the public to know about the Oscars, and whether he's sending a message with his photos, Streiber replied, "The message for me is that the celebrities are human, too. There's a picture that didn't make it into the (exhibit) of Robin Williams coming out of the men's room. And he can't help himself: He'll do a little song and dance number as he goes in and he comes out. … I like to think I'm humanizing the process in the back, and just saying, 'Look what happens. There's joking, there's laughter, there's tears, there's tension, there's all of that stuff. And what we see on television is just, you know, a beautiful presentation."

Streiber will be at it again this year.

The exhibit is free and continues through mid-April.