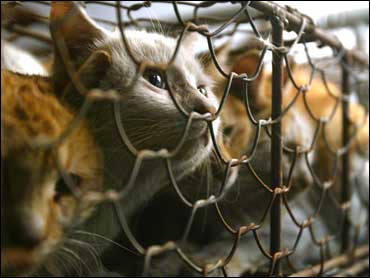 A southern Chinese province must stop the "shameful" and "cruel slaughter" of cats for food, a group of more than 40 animal lovers in Beijing said Thursday as they unfurled banners in a tearful protest.

Thousands of cats across the country have been caught in the past week by traders and transported to Guangdong province to be killed for food, said the protesters gathered at the Guangdong government's office in Beijing.

"We are very angry because the cats are being skinned and then cooked alive. We must make them correct this uncivilized behavior," said Wang Hongyao, who represented the group in submitting a letter to the Guangdong office.

The protesters urged the provincial government to crack down on cat traders and restaurants that serve cat meat, although no law says it is illegal to eat cats. It has long been common for cats and dogs to be eaten in some parts of China and in some other Asian countries.

The demonstrators held up banners saying "Cooking cats alive! Shame on Guangdong!" and "Resolutely oppose cruel slaughter" as they met with a representative of the Guangdong office.

Calls to the Guangdong provincial office in Beijing rang unanswered, while the government news office in the province refused to comment.

The protest was apparently in response to Chinese media reports in recent days that carried pictures of furry felines peering out through bamboo crates and metal cages, apparently en route to Guangzhou, Guangdong's capital. Other pictures show cats being skinned in restaurant kitchens.

About 5,000 cats were sent from Nanjing to Guangzhou, while cats from Shanghai, Hangzhou and other places were also being rounded up, the Chengdu Business Daily reported last week. The paper said people in Guangdong eat 10,000 cats a day.

No reason was given for the increased media coverage, or if there has been an increase in cat meat consumption.

Many of the protesters in Beijing were retirees who said they have been caring for strays cats. The protesters said they believed that some street cats in Beijing, "especially the fat ones," have disappeared and were likely nabbed by cat meat dealers.

"These cats, they are like our children," said Cui Qingzhen, a 56-year-old woman who said she has been feeding street cats for six years. "We can't let these people do this to them."

The demonstrators also noted that a virus that causes severe acute respiratory syndrome, SARS, is suspected to have been spread to humans by civet cats, mongoose-like animals considered a delicacy in southern China.

SARS was first reported in Guangdong in November 2002 and killed 774 people worldwide before subsiding in July 2003. In 2004, Guangdong banned the raising, selling, killing and eating of civet cats.

"Haven't they learned from SARS that some animals just shouldn't be eaten by humans?" Cui said. "Ask the Guangdong people: What else must they eat?"

Ship sinks in storm near Hong Kong; dozens of crew members in danger
Thanks for reading CBS NEWS.
Create your free account or log in
for more features.
View CBS News In
CBS News App Open
Chrome Safari Continue
Be the first to know
Get browser notifications for breaking news, live events, and exclusive reporting.