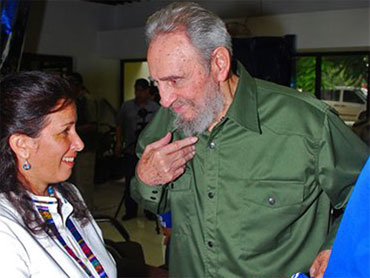 Fidel Castro made his first reported appearance outside Havana on Saturday since a health crisis forced him from power in 2006, the strongest indication yet he is reclaiming a major public persona after years out of the spotlight.

The gray-bearded, 83-year-old wore an olive-green shirt at a ceremony in Artemisa, 40 miles (64 kilometers) west of Cuba's capital, honoring fallen fighters in his revolution. Through frail, Castro looked a bit like his old self in video released on state television and in photos posted on the government website Cubadebate.

It was the latest in a slew of public appearances in recent weeks, but was of note because it marked Castro's first confirmed trip outside Havana since undergoing intestinal surgery, and because he wore an olive green button-down shirt.

Though devoid of stars and insignia, the shirt was reminiscent of the military uniform that was Castro's trademark for nearly a half century and differed sharply from the tracksuits he had on in government photos and videos released as he recuperated from his undisclosed illness in a secret location. He also occasionally had wore street clothes when visiting with foreign leaders or dignitaries.

Saturday's posting on Cubadebate also made a point of calling Castro ``Commander in Chief,'' a title he has largely shunned since he ceded power to his younger brother Raul first temporarily in July 2006, then permanently in February 2008.
Castro's appearance outside Havana came two days before Revolution Day the top official holiday on communist Cuba's calendar marking the July 26, 1953, attack on the Moncada army barracks in the eastern city of Santiago, and a smaller military outpost in the nearby Bayamo. Both Castro brothers participated in the raids.

The operation failed spectacularly with nearly all involved killed or imprisoned, but Cubans consider it the beginning of the revolution that culminated with dictator Fulgencio Batista's ouster on New Year's Day 1959.

Many of the Moncada attackers hailed from Artemisa, and Castro visited a local museum in their honor Saturday.
He laid a wreath at a mausoleum for the rebels and also greeted a small group of Cubans who rushed to the site to see him as word spread Castro was in town.

He read a statement, saying at one point, ``the simple fact of maintaining this fight for such a long time, provides proof of what a small country can achieve against a gigantic, imperial power.''

Cuban officials at all levels of government routinely refer to the United States as an ``empire.''
Castro's appearance was sure to raise more questions about whether he will turn up for the main celebration of Revolution Day in the central city of Santa Clara on Monday.

Raul Castro is expected to give a speech, but anything he said would be overshadowed by his older brother's presence.

In the meantime, Fidel Castro has been popping up everywhere.
On July 16, he took questions from Cuban ambassadors at the Foreign Ministry and warned them of the threat of global nuclear war his sixth appearance of the month.

In Castro's other appearances, he met with workers at a science think tank, sat down for an interview on a current affairs program, visited an economics center and took in a dolphin show at the national aquarium in Havana.

The relative media blitz has many observers wondering if the former president plans to reinsert himself into Cuba's political scene at a particularly sensitive time. The government is in the midst of freeing 52 political prisoners, faces a severe economic malaise and has been cracking down on high-level corruption.