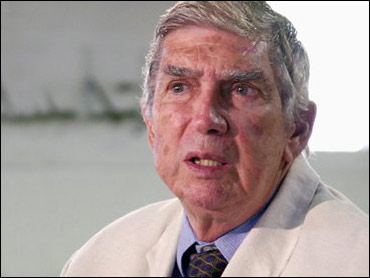 A two-and-a-half hour speech Saturday night by Cuban President Fidel Castro was the final salvo fired in an international conference that accused the United States of hypocrisy in the fight against terrorism.

"The empire has to be forced to hand over its henchmen, to comply with treaties, with U.N. and bilateral accords and those with the nations of the Caribbean, that it hand over the criminals," Castro declared, referring to Luis Posada Carriles, a CIA-trained Cuban exile wanted in connection with the 1976 bombing of a Cubana commercial jet that killed all 73 on board.

Castro wants Posada tried for that and a series of Havana hotel bombings in 1997 that killed an Italian tourist. In a 1998 interview with the New York Times, Posada said he was behind the hotel explosions.

Venezuela is demanding that Posada be extradited to Caracas, where there is an outstanding warrant for his arrest. Posada escaped from prison there while awaiting a third trial in the jetliner bombing. He was acquitted twice, in what several observers have described as corrupt proceedings. They claim Posada's close ties his former employer, the Venezuelan security services, played an influential role in his acquittals.

The Caribbean foreign ministers have also called on the United States to help bring Posada to justice. The Cubana jet exploded right after takeoff from Barbados. Posada, they said, is "the primary suspect" in "the most horrific act of terrorism ever experienced by the countries" of the Caribbean.

The Havana conference was part of Cuba's campaign to focus media attention on Posada, who is currently being held by federal authorities in El Paso, Texas, while awaiting a hearing before an immigration judge on June 13th. Posada, who is on a U.S. terrorist watch list, illegally slipped into the United States nearly two months before being picked up by authorities in Miami May 1.

Castro delivered some 20 speeches in less than a month demanding that the Bush administration find and arrest Posada, but Washington expressed skepticism about his presence in the country, that is, until Posada began giving interviews to the Miami press.

This case has the United States in a bind, Castro said at the conference closing, but "we have to demand that they talk, that they explain, that they say how he entered [the country] and then we'll know a whole lot of things."

His remarks drew repeated applause from some five hundred left-leaning academics, political figures and activists from more than 60 countries who heeded Castro's hastily issued invitation to the three-day event.

In an earlier address to participants, Venezuelan Vice President Jose Vicente Rangel blasted the U.S. as "hypocritical" and said Caracas would renew its request for Posada extradition. There is an extradition agreement between Caracas and Washington, but State Department sources have indicated that Posada would not be extradited either to Cuba or to its close ally Venezuela.

Saturday, the Miami Herald reported that Posada intends to fight to remain in the U.S. The paper interviewed him in a Texas detention center. They quoted him as saying, "In the United States, I want to lead a normal life. I will paint and work for my fatherland." He did not say whether he would renounce the use of violence in his struggle to topple Castro.

Posada, who at 77 is one year younger that his arch-foe, implied that he expected positive results at his upcoming immigration hearing. "Many things will be decided there," Posada told the Herald. "I won't be here for long."

"The worst thing about this is the protection that the people who were involved in this killing have enjoyed from the U.S. Government," said Carlos Alzucaray, who has spent many years in Cuba's Foreign Service. "Now we are learning everything about this. How they [anti-Castro Cuban exiles] moved around. They were trained by the CIA."

Peter Kornbluh, director of the Cuba Documentation Project at the National Security Archives at George Washington University, says, "Declassified CIA and FBI documents clearly tie Posada to acts of terror, including the bombing of Cubana flight 455." He added that "still secret U.S. files could provide significant evidence to prove his dangerous background in both his hearing for asylum and any future trial on the downing of the plane," which Kornbluh called "one of the most dramatic acts of international terrorism ever to occur in Latin America."

Alzucaray believes that Posada and other Cuban exile militants must be punished for a long list of reprehensible acts. He blames them for making his stint at the Cuban Embassy in Buenos Aires, Argentina, a dangerous posting.

"Two young Cuban diplomats were kidnapped and later we learned that they were murdered by the Argentinean security services. But we know now that Cuban, Cuban Americans participated in that kidnapping," said Alzucaray.

Argentina became so dangerous by 1976 that Alzucaray and his wife feared for their two children, then ages 3 and 7. "The last year we were in Buenos Aires we decided to leave the children with their grandmother in Cuba. The last girl who took care of them was kidnapped -- never, never appeared. She disappeared completely. And she disappeared one day after leaving my house. She was Argentinean, and apparently the only reason she was kidnapped and killed was that she was working for the Cuban embassy."

In a public speech last month, Castro revealed a series of contacts between his communist government and the Clinton Administration in 1998, relating to terrorist activities against Cuba.

From June 16 through 17, he said, Cuban and FBI officials met in Havana. The Cubans turned over detailed dossiers about "violent plots being hatched in Miami, together with video and audio tapes and in-depth personal information" on the organizers of these activities. Although unstated, it was clear that the only way the information could have been obtained was via infiltration of these anti-Castro groups.

Castro charges that the Miami office of the FBI twisted things around. On September 12, 1998, just three months after receiving the information, the FBI launched a dawn raid that netted five Cubans penetrated into Miami's militant exile organizations on charges of spying. Tried in vehemently anti-Castro Miami, they have been in prison every since and their families are among the most ardent supports of Castro's campaign to bring Posada to trial.

"I was 14 years old and it was four in the morning and I heard some noises. I thought I was dreaming, but then I heard my Mom's voice and the voice of a stranger telling me to lift my hands, to come to him, 'don't touch anything,' he said," recalled Irma, daughter of Rene Gonzalez one of the five, sentenced to 18 years in prison.

"It's really hard for me knowing that my Dad is in jail, a person whose only crime is trying to prevent people from getting hurt," said Irma during a break in the anti-terrorism conference. "We're only asking for justice. This killer Posada Carriles has to go to jail, has to pay for what he has done."

Ramon Labaniño, also arrested that dawn, was sentenced to one life sentence plus 18 years. He and his wife Elizabeth have been apart for 12 of the 15 years they've been married. Still she says, "It's worth it. When I saw the images of the people dying in the [twin] towers, I thought if the American people would have infiltrated those al Qaeda groups, maybe they would have known in advance what their plans were" and prevented them. "We are hoping that the American people will know the truth, that Posada Carriles is like bin Laden, and will understand, the reasons for Ramon and his friends to be there in Miami infiltrating those groups."

And she agrees with Irma, who said, "I don't think there's good terrorism or bad terrorism, there's only terrorism."