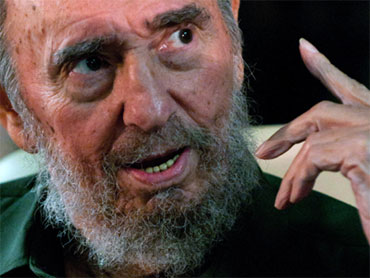 Fidel Castro criticized Iranian President Mahmoud Ahmadinejad for denying the Holocaust and advocated global nuclear disarmament, specifically recommending to Israel that the only way it can achieve security is through dropping its nuclear arsenal, in an interview published online Tuesday.

Cuba's revolutionary leader also discouraged the United States and Israel from using sanctions and threats as a strategy to deter Iran from pursuing nuclear weapons of its own, The Atlantic magazine reported on its website.

"This problem is not going to get resolved, because the Iranians are not going to back down in the face of threats," Castro told the magazine.

The Atlantic's Jeffrey Goldberg spent three days in Cuba interviewing Castro, describing him as "frail and aged" -- two bodyguards held the former leader by the elbow when Castro greeted Goldberg -- along with an "acute" mind, "high" energy level and "a self-deprecating sense of humor."

"The Jews have lived an existence that is much harder than ours," Castro told the magazine. "There is nothing that compares to the Holocaust."

Castro's comments come the week of Rosh Hashana, the Jewish new year. His remarks also came less than three weeks before the U.N. General Assembly is scheduled to convene in New York Sept. 23. Ahmadinejad has attended the annual meeting of world leaders representing Iran, which is a U.N. member.

Before last year's meeting, Ahmadinejad said he was proud that denying the Holocaust had angered Western governments.

Castro, who set off the Cuban missile crisis in 1962, told the magazine that he advocated nuclear disarmament not just for Israel but for all nuclear powers as the only way to guarantee global security.