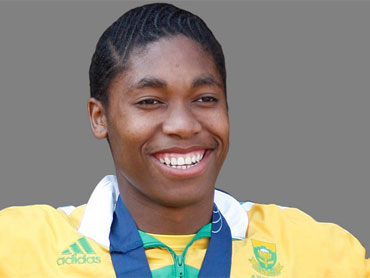 (CBS/AP) South African running phenomenon Caster Semenya, who blew past her competition at the Berlin world championships last August, has been cleared to compete as a woman - nearly a year after controversial gender tests put her career on hold.

Semenya, 19, has not run competitively for 11 months. During that time she underwent a battery of psychological, gynecological and endocrine tests.

"I am thrilled to enter the global athletics arena once again and look forward to competing with all the disputes behind me," Semenya said in a statement released by her lawyers.

Semenya first grabbed the world's attention as an 18-year-old ,when she ran 800-meters in 1:56.72 at the African Junior Championships in Mauritius. She clocked the fastest time of the year.

It was then that speculation about her gender began, according to an article in Time.

Soon after, Semenya clocked 1:55.45 in Berlin - again, the fastest time of the year. Now people really began to talk.

Semenya has an extremely muscular build, and a few of the women she left in the dust shared scathing assessments of her physical makeup with the press. Elisa Piccione of Italy, who came in sixth place, said that Semenya is "not a woman. She's a man." Mariya Savinova of Russia, who finished in fifth place said to just "look at her," according to the article.

The mudslinging angered politicians and activists, and Semenya became a South African household name. The country's ruling  ANC party made a public statement Tuesday, calling the decision "a vindication of the ANC, her family, our government and all progressive forces who stood behind her during her time of need," said national spokesman Jackson Mthembu.

"It has always been our long-held view that Caster is a woman and she should have been allowed a long time ago to participate in athletics as a woman," added Mthembu. "We don't believe that any aspersion should have been cast on her gender as woman."

Yet IAAF, the governing body for track and field, insisted that no insult had ever been intended, and that they did not think that Semenya was deliberately concealing her gender. Nick Davies, IAAF spokesperson called it a "medical issue," ESPN reported.

The medical issue Davies was referring to is called androgen insensitivity syndrome. People with this rare condition appear to be female, and they are, for all practical purposes. Yet in actuality, they have one X chromosome and one Y chromosome in each cell, the pattern normally found in males, according to WebMD.

Some women don't find out that they have the Y chromosome until they try to conceive and end up getting the news from a doctor in a fertility clinic.

The IAFF was heavily criticized for asking Semenya to take the gender tests, some say for good reason. It was widely reported that the International Olympic Committee stopped testing in 1996, when eight female athletes  tested positive for the Y hormone. Experts say that testing serves little purpose, as having androgen insensitivity syndrome does not necessarily give an athlete an advantage.

Semenya's father told Reuter's television that he felt that his daughter was treated badly. The lightning-fast young runner, however, seems to have her sites set squarely on the next race.