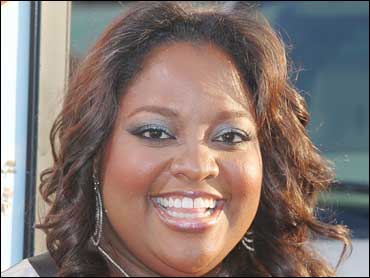 It's official -- all five chairs at "The View" are finally filled.

Admitting it was "the worst kept secret," Barbara Walters announced that comedian and actress Sherri Shepherd has replaced Star Jones as a permanent co-host on the show.

To further dramatize the long-awaited introduction, Shepherd then walked on stage to the tune of "Sherry."

An overly excited Shepherd said "I'm with all the ladies!" and then didn't hold back by letting out a big scream.

Shepherd's introduction marked the first time that the daytime chat show has a full cast since before Rosie O'Donnell left.

The comedian-actress is no stranger to co-hosting "The View" as she has guest-hosted 23 times throughout the summer while trying out to see if the shoe would fit, and it did.

Shepherd was also caught in the crossfire during the show that ultimately lead to O'Donnell's early departure from "The View." In vain she tried to go to a commercial to end the argument between Hasselbeck and O'Donnell over the later's comments about the war in Iraq.

Shepherd appears in the upcoming film "Who's Your Caddy." She has also starred in "Pauly Shore Is Dead" and "The Jamie Foxx Show." She even played God once on the CBS show "Joan of Arcadia."

Published reports had Walters set to appoint Shepherd in late July, around the time Whoopi Goldberg was selected as the show's new moderator, but the announcement was delayed, perhaps an indication that negotiations were still being smoothed out.