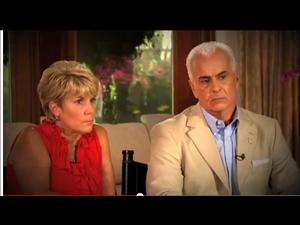 (CBS/WTSP/AP) LOS ANGELES - Casey Anthony's father said in an interview on "Dr. Phil" that his daughter is not welcome in his Orlando home and would turn her away if she tried to visit.

When asked by host Phil McGraw if Casey Anthony would be welcome in his house, George Anthony replied, "Not while I was there, no," according to a transcript provided by the show.

George Anthony and his wife, Cindy, spoke to McGraw for an interview airing Tuesday and Wednesday on the syndicated TV program and for another "Dr. Phil" show later this month.

In opening statements for Casey Anthony's trial for the murder of her 2-year-old daughter, Caylee, defense attorney Jose Baez accused George Anthony of sexually molesting Casey as a child. Baez also alleged that George, a former police officer, made Caylee's death look like a homicide after the girl drowned.

Baez never presented any testimony or evidence to back up his statements. George Anthony has vehemently denied the allegations.

Cindy Anthony said on the show that it would be difficult for Casey to return, given her relationship with her father. She struck a conciliatory tone regarding her daughter, who was acquitted in July of murdering Caylee and released from jail to an undisclosed Florida location.

"I would love to see her be happy either in a career or in a family setting," Cindy Anthony said. "You know, I'd love for her to get married if she so chooses and, if she's healthy, to be able to be a mom again."

Cindy Anthony said she hopes her daughter gets therapy and any treatment that's required and, at some point, is able to "move on" with her life.