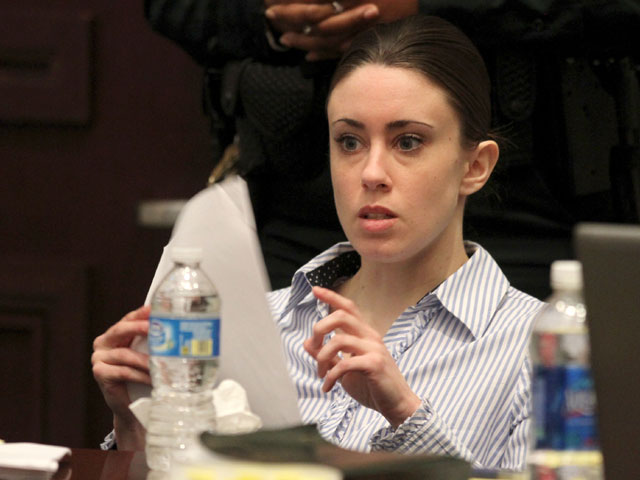 (CBS/WKMG/AP) ORLANDO, Fla. - After deliberating for more than 10 hours, a jury of seven women and five men found Casey Anthony not guilty Tuesday of first-degree murder in the 2008 death of her 2-year-old daughter Caylee.

Anthony was also found not guilty of aggravated child abuse and aggravated manslaughter. She was found guilty of four lesser charges of providing false information to a law enforcement officer.

Judge Belvin Perry will sentence Anthony Thursday morning on those charges. While she could receive up to a year in jail for each count, legal expert Mark O'Mara told CBS affiliate WKMG he expects Perry to give Anthony time served. She has been in the Orange County Jail since October 2008.

Anthony, 25, has been on trial since May 24 in a case that has been broadcast across the country, starting with Caylee's disappearance in 2008. Caylee's decomposed body was found in the woods near the Anthony's home and a medical examiner was never able to determine how she died.

Caylee was reported missing on July 15, 2008, after Casey Anthony told her parents she had not seen Caylee since she was kidnapped by a nanny on June 16, 2008.

Later at trial, the defense said she lied about the nanny, claiming that Caylee had actually died in the family swimming pool on June 16. They stated that her seemingly carefree attitude was in fact a way for her to hide the emotional distress caused by sexual abuse from her father.

Casey Anthony did not take the stand during the trail, leaving her claim as to how Caylee died unsubstantiated.

The prosecution contended that Caylee was suffocated with duct tape by her mother, who loved to party, tattooed herself with the Italian words for "beautiful life" in the month her daughter was missing and crafted elaborate lies to mislead everyone from investigators to her own parents.

Many dedicated followers of the trial camped outside the courthouse daily to get a spot to watch the drama from inside the courthouse. It was this public fascination and heavy media attention that caused jury selection to take place outside of Orlando. Jurors were brought in from the Tampa Bay area and sequestered for the entire trial.

Casey Anthony cried after the verdict was read and hugged her attorney Jose Baez.

"While we're happy for Casey, there are no winners in this case," Baez said at a news conference after the hearing. "Caylee has passed on far, far too soon and what my driving force has been for the last three years has been always to make sure that there has been justice for Caylee and Casey because Casey did not murder Caylee. It's that simple. And today our system of justice has not dishonored her memory by a false conviction."