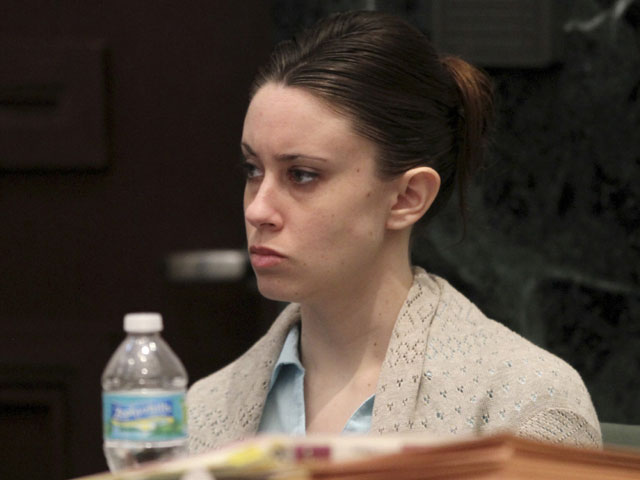 Jurors couldn't take their eyes off the tapes featuring Casey Anthony's own words in an Orlando courtroom Thursday, Beth Karas, correspondent for Tru TV's "In Session" said on "The Early Show" Friday.

Karas, a former prosecutor, was in the courtroom and said jurors were "transfixed" and didn't even take notes - barely looking up at the accused - as they watched hours of tape on monitors in the jury box.

The jury viewed video of Casey Anthony's visits in jail with her brother, Lee, and her mother back in 2008, in addition to hearing tapes of conversations with the detective that she had when her daughter was missing.

Karas said, "Lie after lie was told by this woman, who the defense says knew at the time that her baby was dead. Yet, she kept telling her parents and her brother that her main concern was finding her daughter."

CBS News Correspondent Mark Strassmann reported that, through it all, there was no admission that 2-year-old Caylee died in the family swimming pool, which the defense is now claiming. Instead, Casey Anthony maintained her story that her daughter had been taken by a babysitter named Zanny, which even Casey's mother seemed to question.

Cindy Anthony said in the tapes, "Everybody is looking for her. Are we going to be able to find her, do you think?"

Casey Anthony replied, "I hope we can, Mom."

Karas said, ""She gave her mother a message to give to the media because her mother was speaking to the media at the time. People were out searching for this little girl. The message said all Casey Anthony wanted back was her baby. The message was, 'Please tell Zanny to give her back.' And all along, she knew she was dead -- either at her own hands or an accidental drowning."

On the stand, Detective Yuri Melich testified that Casey claimed she worked at Universal Studios, which turned out to be a lie. Fed-up police confronted her in an hour-long recorded meeting.

In a taped recording of that interview, an officer said, "I know and you know that everything you've told me is a lie, is that correct?"

Casey Anthony responded, "Not everything I told you."

The officer replied, "OK, pretty much everything you told me, including where Caylee is right now."

Casey Anthony can be heard saying, "That, I still - I don't know where she is."

The detective said, "Sure you do."

Melich told the jury that police checked the address Casey gave them for Zanny (the babysitter) and discovered that the apartment had been empty for months, and could not find Zanny.

Karas said, "It was very intense in the courtroom, and I don't know how to describe it, but jurors just didn't move as they looked at the series of lie after lie after lie after she gave, no clue whatsoever to where her baby could be."

Later in the interview, a detective said to Casey Anthony, "Either you gave Caylee to someone and you don't want anyone to find out because you think you're a bad mom, or something happened to Caylee and Caylee's buried somewhere or in a trash can somewhere and you had something to do with it."

Casey's defense team admits that their client lied to investigators. They say it's a pattern of behavior she learned after years of sexual abuse at the hands of her father, George Anthony. He denies that allegation.

As for defending the lies, Karas says it's likely Casey Anthony will have to take the stand.

"I don't see any way that they can really prove this defense of sexual abuse without putting her on the stand, but that's a danger, too, because prosecutors will say, 'This woman has led a life of deceit and lies to people and she's doing it to you, too,"' Karas explained. "There's zero evidence of sexual abuse, except for what we think will come from the mouth of Casey Anthony. It's a huge hurdle for the defense, but in a death penalty case, you'll do whatever you can to save the life of your client."

She added that Casey Anthony must take the stand because any evidence of sexual abuse is considered self-serving, meaning it cannot come in unless she says it first.

"She needs to be cross-examined on it first, before anyone else can talk about it. George Anthony denied it, and there apparently isn't anyone else who really knew about it."