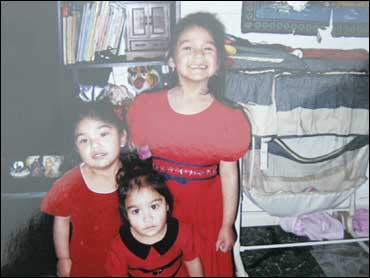 After gathering the courage to leave the common-law husband she described as abusive, Gilberta Estrada was determined to make a better life for herself and her young daughters just a few years after arriving from Tamaulipas, Mexico.

That's according to a Texas caseworker who says Estrada - pregnant with her fourth daughter - moved into a women's shelter, where she learned to ride the bus to her doctor's appointments. She got a work permit and began a job at a fast-food restaurant. Finally, a few weeks after baby Evelyn was born, she moved into her own mobile home.

Authorities say Estrada apparently performed a murder-suicide this week inside her locked trailer, stringing up herself and her four girls using nooses fashioned from clothing and sashes. Her sister discovered the bodies Tuesday. The only survivor was 8-month-old Evelyn Frayre, who was named after the case worker at the shelter where her mother stayed.

Officials said a relative described Estrada as depressed, but the news stunned the women's shelter and those who worked with her. Estrada had been planning the baby's baptism, Haro said, and seemed to have turned her life around.

"Obviously, every client that comes into the shelter is going to have a difficult time, and at times she was sad, but she was so eager to do better for her daughters," Haro said. "There was nothing to raise a red flag to me. She would always have a smile, and she loved, loved, loved those little girls."

The infant was released from a hospital Wednesday to the custody of Child Protective Services, which will temporarily place her with a foster family. Dr. Kimberly Aaron, medical director of emergency services at Cook Children's Medical Center in Fort Worth, called the infant a "miracle."

The doctor attributed the baby's survival to the fact that she weighed only 20 pounds and that her neck was protected by fatty tissue that kept it from breaking while she was suspended in the closet. The baby has no brain damage, and no-long term problems are expected, Aaron said.

The baby's constant smile, babbling and bouncing to music charmed the nurses, she said.

"She has a very happy, playful disposition," Aaron said.

Although there were indications of depression, there was no documented history of suicide attempts and no evidence of antidepressants in the home, the medical examiner's office said. There was also no suicide note.

The child's father, Gregorio Frayre Rodriguez, went to the hospital but was not allowed to see the baby because of a protective court order issued in August after Gilberta Estrada claimed he abused her and tried to hit one of the children.

Gilberta Estrada claimed Frayre had been abusive since the couple began living together in 2003, at times pulling her hair, slapping her, trying to strangle her and once forcing her to have sex, according to court documents.

In June, he raised his hand to the oldest child, 5-year-old Maria, when the girls were fighting over a toy, and then kicked Estrada and pulled the phone out of her hand when she tried calling 911, according to documents.

About a week after that, Estrada left Frayre and took her children to a shelter in Weatherford. Because workers could not speak Spanish, Estrada was sent the next day to a SafeHaven of Tarrant County shelter in Fort Worth, about 25 miles east.

Estrada said she stayed in the abusive relationship because she had been too afraid to call police, fearing she might be deported because she had entered the country illegally, Haro said. Estrada said in court documents that Frayre also was the father of 3-year-old Yaneth "Janet" Frayre and 21-month-old Magaly Frayre.

But while living at the shelter — which helped her get a work permit — from mid-June to late September, Estrada's fear of being on her own slowly faded, Haro said. Estrada left the shelter a few weeks after giving birth to Evelyn in September, saying she would live in a trailer across the street from her sister in Hudson Oaks, just outside Weatherford.

Donna Guion, a SafeHaven attorney who represented Estrada in the child custody case, said Frayre had not paid the $300 monthly child support since December. But Guion said Estrada was not depressed by those things.

Just two weeks ago, Estrada called Haro to ask whether she had received some pictures of the children. Haro said she asked about the baptism and was told she would be invited.

"I'm in shock because that was the last person I would expect something like that to happen to," Haro said. "She was my success story. I told her, 'I'm so proud of you.'"