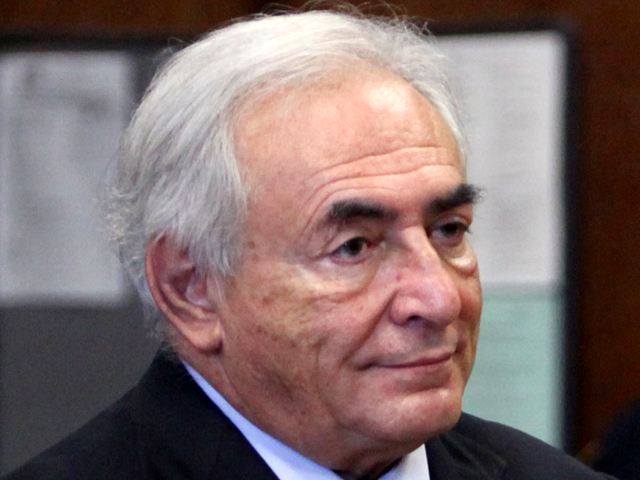 According to the Times, sources described as well-placed law enforcement officials say the accuser in the case lied to investigators. Despite the presence of forensic evidence of a sexual encounter, they said prosecutors dismissed much of what she described about the alleged encounter, according to the Times. "If this is true, if there are serious problems now with the alleged victim's credibility, those problems aren't likely to get better the closer the case goes to trial so I wouldn't be surprised at all, again if this is true, if prosecutors were thinking of backing away," said Andrew Cohen, CBS Radio News legal analyst. "The sourcing of this story is important-- the leaks evidently are coming from law enforcement sources and not defense attorneys-- and that makes the story more likely to be true, or at least partially true. We'll know soon," he added. Strauss-Kahn is accused of trying to rape a hotel housekeeper. He been under armed guard in a Manhattan townhouse after posting a total of $6 million in cash bail and bond. He denies the allegations. In what would mark a major reversal, officials from New York City's District Attorney's office are going to inform the court at a Friday hearing that their investigation has turned up "problems with the case," according to the Times. "It is a mess, a mess on both sides," one official was quoted as saying.

Meanwhile, sources close to the defense tell CBS News they expect Strauss-Kahn's bail restrictions will be either substantially reduced or lifted on Friday, indicating he may even be released on his own recognizance. The sources did not confirm whether the apparent problems with alleged victim's credibility were the reason for their expectations. They also made it clear they do not expect the charges against Strauss-Kahn to be dropped Friday under any circumstances, as it is just a bail hearing. Unnamed sources also told the Associated Press that Strauss-Kahn would likely get his pricey bail and house arrest arrangement eased in the Friday hearing. Strauss-Kahn lawyer William W. Taylor would say only that the hearing was to review the bail plan. The Manhattan District Attorney's office declined to comment. Video:IMF chief Strauss-Kahn quits
Complete coverage of Dominique Strauss-Kahn on Crimesider Strauss-Kahn was held without bail for nearly a week after his May arrest. His lawyers ultimately persuaded a judge to release him by agreeing to extensive - and expensive - conditions, including an ankle monitor, surveillance cameras and armed guards. He can leave for only for court, weekly religious services and visits to doctors and his lawyers, and prosecutors must be notified at least six hours before he goes anywhere.
The security measures were estimated to cost him about $200,000 a month, on top of the $50,000-a-month rent on a town house in trendy TriBeCa in lower Manhattan. He settled there after a hasty and fraught house hunt: A plan to rent an apartment in a tony building on Manhattan's Upper East Side fell through after residents complained about the hubbub as reporters and police milled around the building. Under New York law, judges base bail decisions on factors including defendants' characters, financial resources and criminal records, as well as the strength of the case against them - all intended to help gauge how likely they are to flee if released. Defendants and prosecutors can raise the issue of bail at any point in a case. It's common, if asking a judge to revisit a bail decision, to argue that new information or new proposed conditions change how one or more of the factors should be viewed. The 32-year-old maid told police that Strauss-Kahn chased her down a hallway in his $3,000-a-night suite in the Sofitel hotel, tried to pull down her pantyhose and forced her to perform oral sex before she broke free. Strauss-Kahn's lawyers have said the encounter wasn't forcible, and that they have unreleased information that could "gravely undermine the credibility" of the housekeeper. Her lawyer has said she is prepared to testify despite a "smear campaign" against her. The Associated Press generally does not identify accusers in sex crime cases unless they agree to it. Strauss-Kahn, 62, was in New York on a personal trip. He left the hotel shortly after the alleged assault - to have lunch with a relative, his attorneys have said. During his initial bail hearings, prosecutors noted that Strauss-Kahn was arrested on a Paris-bound plane at John F. Kennedy International Airport, and that they could not compel his return from France if he fled. His lawyers have underscored that it was a long-planned flight, and they've said he wants to return to court to clear his name. He resigned his IMF post after his arrest.