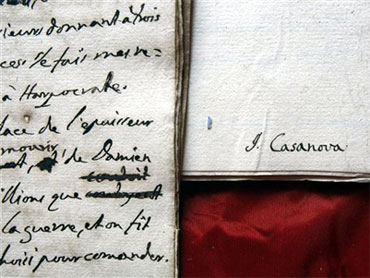 The manuscript given to France's national library Thursday begins simply, yet seductively: "The story of Jacques Casanova ... written by himself."

"Himself" is the 18th century lothario, spy, writer and adventurer whose name has become an international synonym for lover. And the original, $9.5 million manuscript contains Casanova's memoirs, a work that shocked publishers two centuries ago, was spirited away from the Nazis on a bicycle during World War II, and is soon to go on public view for the first time on Paris' Left Bank.

Titled "The Story of My Life," the memoirs depict the manners of the Age of Enlightenment as well as Casanova's personal adventures, sexual and otherwise.

Just a few pages were on display at the French Culture Ministry on Thursday, included the opening page, a technical description of his parents and his background. Some of the writing - all in French - is blotched, with words scratched out.

French Culture Minister Frederic Mitterand said it "contains an essential part of our history." The manuscript will go on public display at the French National Library in Paris next year, and a digital copy of the work will be available on the library's nascent online book site, Gallica.

The journey of the manuscript itself is worthy of Casanova's own adventure tales.

In 1820, the founder of the prominent German publishing house Brockhaus, Frederic-Arnold Brockhaus, grasping the extent of the manuscript's literary value, bought it.

Brockhaus published the memoirs for the first time in 1822, translated into German and "purified" to avoid shocking the public too much with the detailed and intimate accounts of Casanova's love life, said Hubertus Brockhaus, a representative of the family at Thursday's presentation.

The German version was so successful that unauthorized French versions appeared on the market, which prompted Brockhaus to ask for the help of Jean Laforgue, a French teacher in Dresden, to rewrite and publish a French version. The first French tome was published in 1826.

Hubertus Brockhaus said that Laforgue had "falsified in an obvious way passages where Casanova talks about politics" and "modified the meaning of Casanova's remarks."

After another wave of pirate editions, Brockhaus decided to keep the manuscript hidden.

In the midst of World War II in 1943, the Nazis ordered the closure of the publishing house.

"My grandfather took the manuscript on his bike and put it in a safe at the bank," Hubertus Brockhaus said.

Then, in 1945, an American military truck carried the manuscript out of Leipzig and it rejoined the Brockhaus family.

In 1960, the original edition in French was finally published, 140 years after it was first acquired.

The manuscripts were bought by an anonymous patron from the Brockhaus family for euro7.2 million, and then donated to France's National Library, said library spokeswoman Claudine Hermabessiere.

The memoirs are the centerpiece of a collection of Casanova material donated to the library, the largest collection the library has ever received.