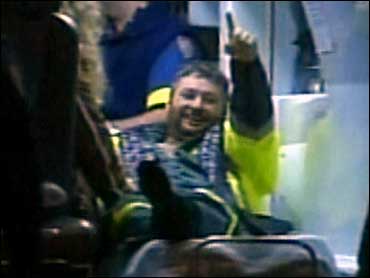 The Toronto Raptors star scored a perfect 50 on three of his five attempts and got a 49 and 48 on the other two to defeat teammate Tracy McGrady and Steve Francis for the title.

Carter used a unique hanger on his first dunk of the final round, driving the ball down and then clinging on the rim from the crook of his elbow. It brought him his third 50 of the night.

"It was something different and I didn't know how the judges would react," Carter said, still trying to gather himself after winning the competition.

"It's unbelievable. It hasn't sunk in yet. I'm having trouble. I just remember back in the days when me and my friends used to tape the dunk contests and watch them over and over."

On his final dunk, Carter went sailing down the floor and took off just inside the free-throw line for a two-handed stuff that earned him a 48 and a final round 98, enough to beat Francis.

Francis finished the final round with 91 points and McGrady 77 after missing his final attempt.

Carter said the final dunk was an attempt to duplicate one of Julius Erving's most famous dunks when he took off from the foul line.

"I wasn't too happy with it, but I'll take it," Carter said. "I wish I could have tried it again. I think I would have done better."

Carter set the tone with his first dunk of the night. He did a 360-degree spin to his right in the lane and then brought ball up from his right hip before powering it through the basket, sending the crowd into a frenzy and getting a perfect 50.

Toronto teammate McGrady matched the 50 on his final dunk of the first round, catching the ball after it bounced high on the floor and then making a double clutch stuff.

But on Carter's third and final dunk of the first round it was apparent he would be almost impossible to beat.

He took a bounce pass from McGrady one first-round dunk had to be done in coordination with a teammate brought the ball under his right leg while he was in the air and then slammed it through. It brought the judges out of their seats and one of them, Isiah Thomas, jumped on the scorer's table to cheer.

"It made me say ohh, it made me saw ahh and then I just jumped," Thomas said.

The popular contest was revived this year for the first time since 1997.

Each dunk is scored from six to 10 by each judge. The first-round score is based on a composite with the lowest score excluded and three of the six contestants advancing to the finals.

Carter had a first-round 100 to advance with McGrady (99) and Francis (95). Eliminated were Ricky Davis of Charlotte, Jerry Stackhouse of Detroit and Philadelphia's Larry Hughes, who missed his first two attempts.