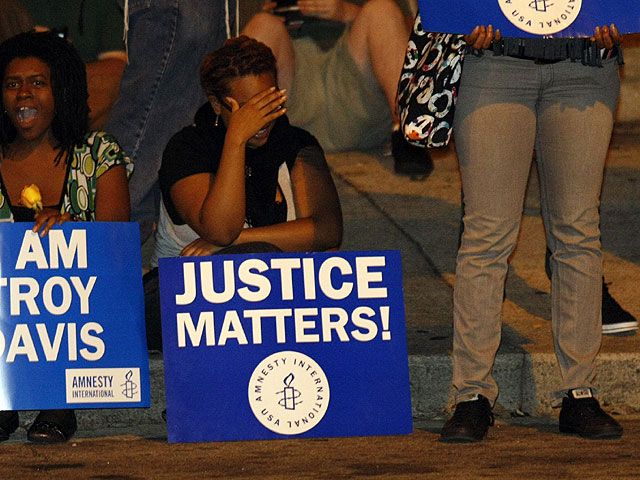 The Georgia Democrat said Thursday in a statement to The Associated Press that he hopes "this tragedy will spur us as a nation toward the total rejection of capital punishment."

Davis was executed late Wednesday night for the 1989 murder of off-duty Savannah police officer Mark MacPhail. His supporters insist he was the victim of mistaken identity, while prosecutors and MacPhail's family said justice was finally served after four years of delays.

Carter says "if one of our fellow citizens can be executed with so much doubt surrounding his guilt, then the death penalty system in our country is unjust and outdated."

Davis maintained his innocence until the end.

"All I can ask ... is that you look deeper into this case so that you really can finally see the truth. I ask my family and friends to continue to fight this fight," he said moments before he was executed Wednesday night.

Just a few feet away behind a glass window, MacPhail's son and brother watched in silence.

"I'm kind of numb. I can't believe that it's really happened," MacPhail's mother, Anneliese MacPhail, said in a telephone interview from her home in Columbus, Ga. "All the feelings of relief and peace I've been waiting for all these years, they will come later. I certainly do want some peace."

She dismissed Davis' claims of innocence.

"He's been telling himself that for 22 years. You know how it is, he can talk himself into anything."

Davis was scheduled to die at 7 p.m., but the hour came and went as the U.S. Supreme Court apparently weighed the case. More than three hours later, the high court said it wouldn't intervene. The justices did not comment on their order rejecting Davis' request for a stay.

Hundreds of thousands of people signed petitions on Davis' behalf and he had prominent supporters. His attorneys said seven of nine key witnesses against him disputed all or parts of their testimony, but state and federal judges repeatedly ruled against him — three times on Wednesday alone.

When asked Thursday on NBC's "Today" show if he thought the state had executed an innocent man, civil rights leader the Rev. Al Sharpton said: "I believe that they did, but even beyond my belief, they clearly executed a man who had established much, much reasonable doubt."

Officer MacPhail's widow, Joan MacPhail-Harris, said it was "a time for healing for all families."

"I will grieve for the Davis family because now they're going to understand our pain and our hurt," she said in a telephone interview from Jackson. "My prayers go out to them. I have been praying for them all these years. And I pray there will be some peace along the way for them."

Davis' supporters staged vigils in the U.S. and Europe, declaring "I am Troy Davis" on signs, T-shirts and the Internet. Some tried increasingly frenzied measures, urging prison workers to stay home and even posting a judge's phone number online, hoping people would press him to put a stop to the lethal injection. President Barack Obama deflected calls for him to get involved.

"They say death row; we say hell no!" protesters shouted outside the Jackson prison before Davis was executed. In Washington, a crowd outside the Supreme Court yelled the same chant.

As many as 700 demonstrators gathered outside the prison as a few dozen riot police stood watch, but the crowd thinned as the night wore on and the outcome became clear.

Davis' execution had been halted three times since 2007. The U.S. Supreme Court even gave Davis an unusual opportunity to prove his innocence in a lower court last year. While the nation's top court didn't hear the case, they did set a tough standard for Davis to exonerate himself, ruling that his attorneys must "clearly establish" Davis' innocence — a higher bar to meet than prosecutors having to prove guilt. After the hearing, a lower court judge ruled in prosecutors' favor, and the justices didn't take up the case.

His attorney Stephen Marsh said Davis would have spent part of Wednesday taking a polygraph test if pardons officials had taken his offer seriously. But they, too, said they wouldn't reconsider their decision. Georgia's governor does not have the power to grant condemned inmates clemency.

As his last hours ticked away, an upbeat and prayerful Davis turned down an offer for a special last meal as he met with friends, family and supporters.

"Troy Davis has impacted the world," his sister Martina Correia said before the execution. "They say, `I am Troy Davis,' in languages he can't speak."

Members of Davis' family who witnessed the execution left without talking to reporters.

"I'm trying to bring the word to the young people: There is too much doubt," rapper Big Boi, of the Atlanta-based group Outkast, said at a church near the prison.

At a Paris rally, many of the roughly 150 demonstrators carried signs emblazoned with Davis' face. "Everyone who looks a little bit at the case knows that there is too much doubt to execute him," Nicolas Krameyer of Amnesty International said at the protest.

Davis was convicted in 1991 of killing MacPhail, who was working as a security guard at the time. MacPhail rushed to the aid of a homeless man who prosecutors said Davis was bashing with a handgun after asking him for a beer. Prosecutors said Davis had a smirk on his face as he shot the officer to death in a Burger King parking lot in Savannah.

Witnesses placed Davis at the crime scene and identified him as the shooter, but several of them have recanted their accounts and some jurors have said they've changed their minds about his guilt. Others have claimed a man who was with Davis that night has told people he actually shot the officer.

"Such incredibly flawed eyewitness testimony should never be the basis for an execution," Marsh said. "To execute someone under these circumstances would be unconscionable."

The National Association for the Advancement of Colored People, which helped lead the charge to stop the execution, said it considered asking Obama to intervene, even though he cannot grant Davis clemency for a state conviction.

Press secretary Jay Carney issued a statement saying that although Obama "has worked to ensure accuracy and fairness in the criminal justice system," it was not appropriate for him "to weigh in on specific cases like this one, which is a state prosecution."

Dozens of protesters outside the White House called on the president to step in, and about 12 were arrested for disobeying police orders.

Davis was not the only U.S. inmate put to death Wednesday evening. In Texas, white supremacist gang member Lawrence Russell Brewer was put to death for the 1998 dragging death of a black man, James Byrd Jr., one of the most notorious hate crime murders in recent U.S. history.

On Thursday, Alabama is scheduled to execute Derrick Mason, who was convicted in the 1994 shooting death of convenience store clerk Angela Cagle.