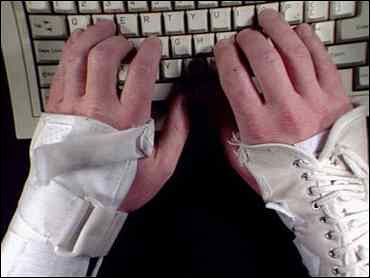 Surgery for carpal tunnel syndrome produces better long-term results in most patients than the more common treatment of putting a splint on the wrist, Dutch research suggests.

The findings "suggest that surgery should be the first rather than last option" for most patients, said researcher Annette Gerritsen of Vrije University in Amsterdam.

The syndrome, often associated with use of computer keyboards, can cause numbness, tingling and pain in the fingers, hands and wrists. It occurs when tendons leading from the hand become swollen and press on a nerve in a region of the wrist called the carpal tunnel.

It affects an estimated 5 million Americans and is a significant cause of missed work days.

Well over 200,000 carpal tunnel operations are done in the United States each year, but splinting is thought to be the most common treatment and is generally tried before surgery is considered. Splints work by keeping the wrist from bending, easing pressure on a nerve.

In the study, 176 patients underwent surgery or wore wrist splints for at least six weeks; they were then evaluated periodically.

After three months, significant improvement was seen in 80 percent of surgery patients, compared with 54 percent of splint patients. At 18 months, the success rate remained significantly higher for the surgery group.

The findings appear in Wednesday's Journal of the American Medical Association.

The study excluded patients with very mild or severe cases, and thus does not prove that surgery is best for everyone, said Dr. Shaw Wilgis, research director at Curtis National Hand Center in Baltimore and an associate professor at Johns Hopkins University.

Surgery involves making a small incision in the wrist and cutting the carpal ligament away from the median nerve to relieve pressure. Surgery generally takes less than an hour and is done on an outpatient basis under local anesthesia.

The study did not examine anti-inflammatory drugs, which also are sometimes prescribed.