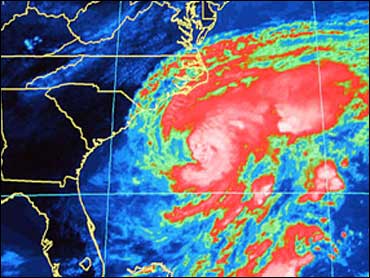 A hurricane watch was posted for the Southeast U.S. coast as Ophelia strengthened into a hurricane once again and meteorologists said its meandering course could take a sharp turn toward land.

A hurricane watch was posted along a 300-mile stretch from the Georgia-South Carolina line to North Carolina's Cape Lookout, meaning hurricane-force wind of at least 74 mph was possible by Sunday evening, the National Hurricane Center said.

South Carolina state emergency officials said a decision would be made soon about whether to order evacuations, but Charleston County announced it would open shelters Saturday evening for voluntary evacuees from low-lying areas and barrier islands.

Emergency management directors along the North Carolina coast said they were prepared for Ophelia and warned residents not to be complacent.

The crew of an Air Force hurricane hunter airplane flying through Ophelia measured top sustained wind of 80 mph. It could strengthen a bit before an expected Monday landfall, said Eric Blake, a meteorologist at the hurricane center in Miami.

"Almost every (computer) model indicates a United States landfall," he said. "It's time to make those preparations."

At 5 p.m. EDT Saturday, Ophelia was centered about 230 miles east-southeast of Charleston, South Carolina, and about 240 miles south-southwest of Cape Hatteras, North Carolina. It was drifting northeast at about 2 mph, but was expected to head to the northwest, toward the coast, on Sunday.

The forecasters said the storm's most likely would strike between Myrtle Beach, South Carolina, and Moorehead City, North Carolina.

Ophelia was already contributing to rough surf along the coast.

Nate and another tropical storm, Maria, posed no threat to land as they weakened over the cooler water of the north Atlantic.

If Ophelia makes landfall in South Carolina it would the third hurricane in 13 months to strike the state. Hurricanes Charlie and Gaston hit the South Carolina coast last season in the same general area.