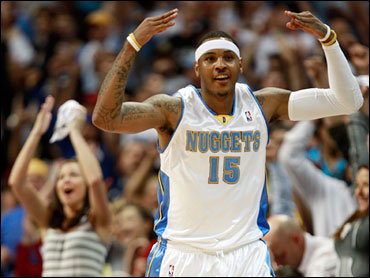 First Nuggets star Carmelo Anthony was getting traded to the Nets. Then it was the Knicks.

Now, a source tells ESPN The Magazine's Chris Broussard, the All-Star forward could be headed to the Los Angeles Lakers in a trade involving Andrew Bynum.

As is always the case with Carmelo rumors, skepticism abounds and Frank Isola of the NY Daily News tweeted that Lakers owner Jim Buss reportedly rejected the deal.

The source described the talks as being "in their infancy" and Broussard himself says a three-way deal between the Knicks, Nuggets and Wolves is "very much alive."

Still, it's tantalizing to envision Carmelo, who's just 26, joining Kobe on an aging team looking to repeat. As for Anthony, he looks reinvigorated after missing a game with an elbow injury, dropping 50 points Monday night against the Rockets.