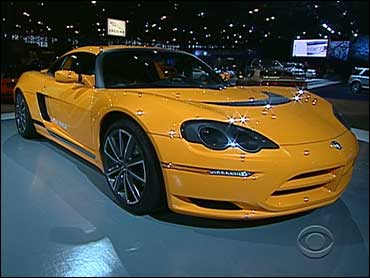 With bankruptcy possible for at least two of America's Big Three automakers, those companies have more on the line than ever at this year's New York Auto Show. They need vehicles that sell, both now and in the future, as CBS News correspondent Priya David reports.

"We used to have parties with champagne and stuff," said Ralph Gilles, Chrysler vice president of design. "That's all gone. We're just getting back to the product."

Like its competitors General Motors and Ford, Chrysler's sales have dropped 40 percent in the past year, and the company is struggling to stay in business.

So how does it feel to be in the industry right now?

"It's like a horror show - you can't stop watching it," Gilles said.

The government is funding Chrysler until the end of April, while the company pursues a partnership with Italian carmaker Fiat to produce more fuel-efficient cars. Gilles showed CBS News some concept cars, like the electric Dodge Circuit.

"It's actually as fast as a muscle car, but it doesn't burn any gas," Gilles said.

General Motors' long-awaited electric vehicle, the Chevy Volt, is finally scheduled to hit the road in 2010. But GM has greater hopes riding on the Chevy Cruze, a sedan that gets 40 miles to the gallon and is due out later this year. GM insists it will still be here when its 60-day government lifeline runs out at the end of May, although many argue that bankruptcy is the best option for the company to reorganize.

"Seriously, I wouldn't be standing here talking to you passionately about the product that we are working on if I didn't think there was a market for us, because we are going to be around," said Michel Simcoe, GM's vice head of North American Exterior Design.

Which, according to Consumer Reports automotive editor Rik Paul, is exactly what buyers should want.

"We don't want to see any automaker, any major automaker, go out of business because that reduces choices for the consumer and has less competition in the market," Paul said.

Ford has been the most forward-looking of the Big Three, and it's offering a smorgasbord of new products, including the new hybrid Ford Fusion.

The company says it plans to recover the old-fashioned way - by selling more cars. It's also offering innovative assurances.

"We guarantee that if you lose your job, that we will make the payments on the car for up to 12 months," Parker said.

As Gilles put it, "That 'Never ay die' attitude is strong. People want to survive."

But even mere survival is far from guaranteed. The economy or years of poor planning could soon drive any of these car companies off the road.