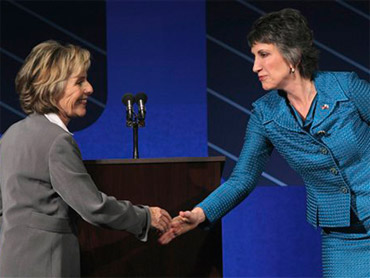 California's Republican Senate candidate Carly Fiorina said last night that she would support the DREAM Act, an immigration measure that aims to help undocumented students. Her remarks set her apart from more conservative Republican candidates this year who are taking a hard line on immigration. They also highlighted the limited bipartisan support the DREAM Act has received, even as comprehensive immigration reform appears out of reach.

In her first debate last night against Democratic Sen. Barbara Boxer, Fiorina said, "I would support the DREAM Act because I do not believe that we can punish children who through no fault of their own are here trying to live the American dream."

The Development, Relief and Education for Alien Minors (DREAM) Act would provide a pathway to citizenship for undocumented students who came to the United States as minors and meet other certain criteria. The bill was crafted by Democratic Sen. Dick Durbin of Illinois and Republican Sen. Dick Lugar of Indiana. Boxer and dozens of other senators have signed on as co-sponsors.

Boxer emphasized last night that she is in favor of comprehensive immigration reform.

"The way to get the economy going again is to go with comprehensive immigration reform," she said. "The DREAM Act is part of that."

Boxer said that Fiorina has called comprehensive reform a "distraction."

Fiorina, meanwhile, said she does not support "amnesty" and said the federal government has "not done its job" securing the border. She also voiced her support for Arizona's controversial new immigration law, which makes it a state crime to be in the country illegally.

Some Republicans have used their hard stance on immigration as a rallying point in this year's election, while at least one candidate, Nevada's Sharron Angle, has associated the DREAM Act with amnesty.

Fiorina kept the issues separate, however.

"I believe that the 21st century is the century of brainpower and innovation," she said. "We need to cultivate all the brainpower we can by making sure that people are well educated here."

Senate Majority Leader Harry Reid said at a liberal conference this summer that he will not put the DREAM Act up for a vote until it has the 60 votes needed to overcome a filibuster in the Senate.

Fiorina has reached out to California's Latino voters with a website called "Amigos de Carly" (Friends of Carly). Additionally, the Latino Partnership for Conservative Principles, an organization of conservative Hispanics, has dedicated $1 million to supporting Fiorina's campaign.