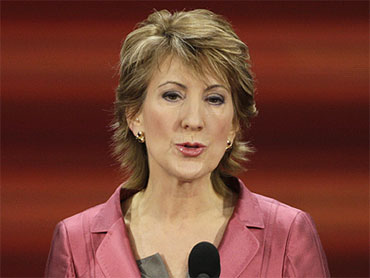 Fiorina ended months of speculation with an announcement in an opinion piece in the Orange County Register. She was expected to make a formal announcement later in the day in Garden Grove.

Her entry into the race could present Boxer with her most formidable re-election challenge, but Fiorina first would have to survive a Republican primary against state Assemblyman Chuck DeVore, who has worked feverishly over the past year to court GOP voters.

"For many years I felt disconnected from the decisions made in Washington and, to be honest, really didn't think my vote mattered because I didn't have a direct line of sight from my vote to a result. I realize that thinking was wrong," Fiorina wrote in her opinion piece.

"I now understand, in a very real way, that the decisions made by the Senate impact every family and every business, of any size, in America. This is what motivates me to run for the U.S. Senate," she wrote.

Fiorina echoed standard Republican complaints that the government taxes, spends and regulates too much.

"Tax, spend and borrow is not a governing philosophy; it's a cycle of dependency and it is one that must be broken," Fiorina wrote. "Washington must show the discipline to cut spending and create policies that encourage and empower businesses to put people back to work."

Complete coverage of 2009 Elections at CBSNews.com:

Fiorina, who recently completed breast cancer treatment, also called for health care reform - but not in the form of a national health system.

The 55-year-old former Silicon Valley executive served as economic adviser to John McCain's failed presidential bid last year, a position that elevated her national profile. Before that, she had a public falling out with HP board members, who fired her in 2005 after she pushed through the company's acquisition of Compaq Computer Corp. in a deal that caused job losses and reduced HP's value. The company has since rebounded, but opinions differ over how much credit Fiorina deserves for that.

On the way out, Fiorina received a $21 million severance package - a cash cushion that has made Boxer's team nervous.

Even before her announcement, Boxer used the threat of a Fiorina candidacy to boost her own fundraising, collecting $1.6 million in the last quarter and reporting $6.3 million in the bank last month.

"If Fiorina decides to fund the campaign with her own personal wealth, this could be the most expensive Boxer campaign yet," said Rose Kapolczynski, a spokeswoman for Boxer's campaign. "We could be looking at a $30 million or $35 million campaign. ... She could do a lot to remake her image with that and do a lot to distort the Boxer record."

Boxer, 68, is in her third term in the Senate and easily won re-election in 1998 and 2004. She has long been a target of conservatives - they pounced earlier this year when she chastised a brigadier general who called her "ma'am" during a congressional hearing - but has yet to face a serious re-election challenge.

Until now, Boxer's only announced opposition was DeVore. A military officer and businessman from Irvine, he has been aggressively campaigning on a shoestring budget for months, styling himself as the only true conservative in the race.

He is appealing to the party's base as the true candidate of limited government, lower taxes and conservative fiscal stewardship.