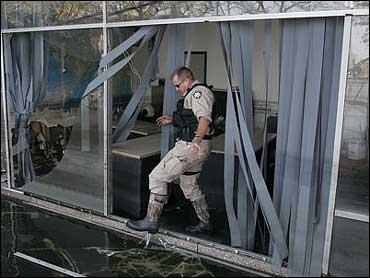 There is no horse-drawn wagon to take the coffin to the cemetery, no wailing jazz band trudging through the streets. The dead these days no longer get the traditional New Orleans send-off.

Instead, gleaming refrigerated trucks escorted by police carry them away; not to their final resting places, but to a disaster morgue in a town bordered by sugar cane fields and the Mississippi River.

The police escort is not for security or speed; it is a gesture of respect to those had been overlooked while rescuers concentrated on saving the living.

"We are treating these people with the dignity and respect they deserve," DMORT spokesman Ricardo Zuniga said. "This is not cargo; this is someone's mother."

With hundreds, perhaps thousands, of people dead in New Orleans, the mortuary specialists in charge of gathering, processing and identifying the victims are trying to accomplish a monumental task with both efficiency and sensitivity.

When a body is found, its location is marked and a DMORT specialist is called in to retrieve it, noting details from the scene, such as an address or personal effects found nearby. The body is shielded from public view by a tarp as workers place it in a black body bag. Upon arrival in St. Gabriel, it will be protected from prying eyes again by a chain-link fence cloaked in black plastic.

The morgue, a 150,000-square-foot tan warehouse with a silver metal roof, is designed to handle up to 144 bodies a day.

Each body is handled individually with the utmost respect and care, Zuniga said.

"They are dealing with one person and they are replicating that 140 times," he said.

Zuniga looked weary and his eyes occasionally welled with tears as he spoke. "I apologize. It's hard to talk about this every day," he said, looking away.

After passing through a gate topped with barbed wire and guarded by an armed federal agent, each body is assigned a number. The body is then decontaminated, both for forensic purposes -- to preserve what little evidence may be left on the corpse after more than a week in the water -- and to protect the specialists who will come into contact with the remains, Louisiana DMORT commander Terry Edwards said.

Edwards, a straight-spoken funeral director from Eastland, Texas, has worked a dozen disaster mortuary operations, including the 1993 floods in the Midwest.

"What is different about this one? The magnitude of it, the sheer size of it," he said with a tinge of awe.

Once a corpse has been decontaminated, it is assigned a tracker, a person who will stay with that body until the identification process is complete.

Personal effects, a wallet, ID, trinkets found in pockets, are then catalogued. The body and the evidence are photographed. The corpse then goes through a round of identification tests, including fingerprinting and DNA analysis.

The forensic specialists, volunteers who work around the clock, look for any clues to the person's identity. A scar indicating a hip replacement can be useful, because a digital X-ray can reveal the serial number on the joint and that will in turn identify its owner, Zuniga said.

If any evidence of a crime is uncovered, such as a gunshot wound, the local coroner is called in to take over. Authorities at DMORT would not say whether they had found any suspected crime victims.

As of Tuesday, the death toll in Louisiana stood at nearly 300. How high the number may go is still far from clear, and authorities have been slow to release numbers. They say that up until the past few days, they were concentrating more on rescuing the living.

"There just may be a lot of people who are still down in those deep waters, and some of the waters were 10, 12, 15 feet deep," Orleans Parish coroner Dr. Frank Minyard said. "My biggest fear is that we will find something down there that is way out of proportion. Hopefully, it doesn't happen, but we worry."

There are approximately 150 workers at St. Gabriel, including support staff from the U.S. Forest Service who take care of tasks such as laundry. Most of the forensic specialists will spend at least two weeks here before rotating out; others will stay longer. Edwards said he expects the morgue to be running anywhere from 45 to 79 days.

On a bulletin board across from Town Hall, near where the workers sleep, was a sheet of paper emblazoned with bold black letters noting the date and, as of Saturday, "Day 14," the number of days since DMORT received its orders from FEMA.

Sometimes it is hard for the workers to keep track of time, Edwards said.
By Jessica Bujol