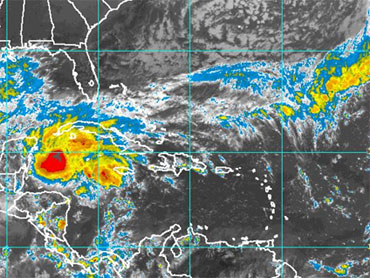 Officials readied storm shelters along Mexico's Caribbean coast Saturday and told fishermen and tour operators to pull in their boats amid warnings that Tropical Storm Ida could become a hurricane as it neared the resort city of Cancun.

The U.S. National Hurricane Center in Miami said Ida's winds strengthened to near 70 mph (110 kph), just short of a Category 1 hurricane. A tentative forecast track predicted Ida could brush the U.S. Gulf Coast next week as a tropical storm.

Tropical storm warnings have been issued for parts of Mexico and Cuba as Ida rapidly gains strength over Caribbean waters.

A hurricane watch was also issued for part of Mexico's Yucatan Peninsula.

Tropical-storm warnings were issued for the Mexican coastline from Punta Allen, south of Tulum, to San Felipe at the top of the peninsula, an area that includes Cancun. The warnings were also in effect for western Cuba and Grand Cayman Island.

Ida has top winds of 70 mph and forecasters say it could become a hurricane later Saturday. The storm is moving toward the north at about 9 mph. It's centered about 230 miles (370 kilometers) southeast of Cozumel, Mexico. It was projected to pass the tip of the Yucatan Peninsula on Sunday.

"We are on yellow alert," said Juan Granados, assistant director of civil defense for Quintana Roo state. He said Ida was also expected to brush the nearby island tourist destinations of Cozumel and Isla Mujeres.

As rain began pelting down in Cancun, authorities started up a reporting system used to locate tourists and plan potential evacuations or shelters.

Granados said seven storm shelters were being readied on Cozumel, five on Isla Mujeres and seven on Holbox, an island north of the peninsula.

Authorities suspended fishing along part of the Yucatan coast and told tour operators who offer reef snorkeling and diving excursions to stay in port, Granados added.

Popular Mayan sites such as the seaside ruins of Tulum were to remain open, but employees worked to clean up debris that could become a hazard in high winds, Mexico's National Institute of Anthropology and History said in a statement.

John Cangialosi, a specialist at the Hurricane Center, said that as Ida heads north across the Gulf of Mexico, it is expected to meet a cold front that is moving south - making longer-term forecasts complicated for now.

"There's going to be some sort of interaction between the two, but where they interact, and how, and the timing of the thing, that's kind of the big question mark," Cangialosi said.

Regardless of how the cold front affects the tropical system, Cangialosi said residents on the north Gulf Coast can expect lots of wind and heavy rain.

Ida plowed into Nicaragua's Atlantic coast on Thursday as a Category 1 hurricane, damaging 500 homes along with bridges, power lines, roads and public buildings.